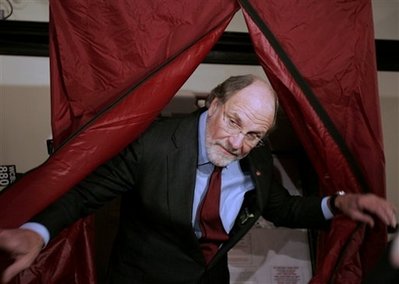 New Jersey Gov. Jon Corzine emerges from the booth after voting at the Elks Club in Hoboken, N.J., Tuesday, Nov. 3, 2009. The governor is running for a second term against Republican candidate Chris Christie and Independent candidate Chris Daggett. Source: AP

TRENTON: Republican Chris Christie has taken an early lead in a tight New Jersey governor's race with Democratic incumbent Jon Corzine (KOHR'-zyn).
With 32 percent of precincts reporting Tuesday night, Christie had 51 percent of the vote and Corzine about 42.
Independent candidate Chris Daggett, who had been feared as a spoiler, had about 5 percent.
An Associated Press exit poll showed that the race was too close too call but that Daggett appeared to be out of the running.

#Republican lead in NJ governor race
You May Also like: