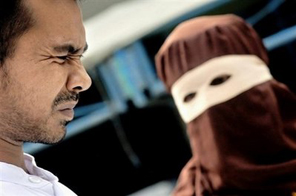 A 25-year-old Indonesian man grimaces in pain as he is caned in public by a veiled law-enforcement official for gambling in Banda Aceh, Indonesia. Rights activists in the populous nation have condemned as Source: AFP

JAKARTA: Indonesian rights activists condemned as "cruel and degrading" Tuesday a new Islamic law calling for adulterers to be stoned to death in the country's staunchly conservative Aceh province.
The law which also allows punishments of up to 400 lashes for offences including rape, the consumption of alcohol, homosexual sex and gambling was passed Monday by lawmakers in the region at the northern tip of Sumatra island.
The law replaces elements of Indonesia's criminal code with sharia, or Islamic law, for Muslims. It allows the death penalty for married people and 100 lashes for unmarried people found guilty in cases of adultery.
"The laws that have been approved in Aceh are cruel and degrading to humanity," National Commission on Human Rights (Komnas HAM) head Ifdhal Kasim told AFP.
The law went against the secular basis of Indonesia, and the rights group is appealing to President Susilo Bambang Yudhoyono to review the legislation, Kasim said.
"This will bring Aceh back to the past. Throwing stones is like Aceh in the fourteenth or fifteenth centuries," Kasim said, adding the law would likely embolden conservatives pushing for sharia on a national level.
The controversial law was passed in Aceh just weeks before a new, more moderate provincial assembly dominated by the Aceh Party of former separatist fighters of the Free Aceh Movement (GAM) was due to take power.
The administration of Aceh Governor Irwandi Yusuf, himself a former GAM fighter, is opposed to the strict sharia law. It had urged a delay in passing the bill.
Ma'ruf Amin, the head of the Indonesian Council of Ulema, Indonesia's top Islamic body, welcomed the new hardline law.
"The Council supports sharia law in areas where it is allowed, like Aceh, which has special autonomy. It's not a matter of good or bad.
"For Muslims, sharia law is the best and can be implemented anytime, anywhere. As long as there is agreement from everyone, there's no problem," Amin said.
Aceh had previously adopted a moderate form of sharia law in 2001 as part of an autonomy package from Jakarta aimed at quelling local separatist sentiment.
Separatists in Aceh had been fighting the Indonesian government since 1976 until a peace deal in 2005.
Nearly 90 percent of Indonesia's 234 million people are Muslim. Most practise a moderate form of the religion.

#Rights activists against new law
You May Also like: