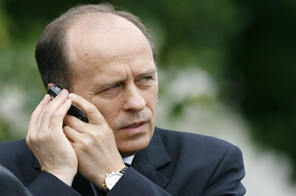 "Audio evidence seized from insurgents shows that, together with emissaries of Al-Qaeda, they had contacts with representatives of the Georgian secret services," Alexander Bortnikov said, quoted by Russian news agencies.
Through these links, Georgia "participated in the training and transfer of terrorists to the territory of Chechnya," the FSB chief said.
Bortnikov also accused Tbilisi of supplying arms and funding terrorist activities in the neighbouring Caucasus region of Dagestan.
"They perpetually undertake to deliver weapons, explosives and financing for subversive acts on high security sites in Dagestan -- first and foremost on oil and gas pipelines," he said.
Tensions between Moscow and Tbilisi remain high one year after they fought a war last August over Georgia's breakaway region of South Ossetia, which lies just south of the mountains from the turbulent Russian Caucasus.
Russia has faced mounting violence throughout its largely Muslim Northern Caucasus in recent months as Islamist militants wage a low-level insurgency against the Moscow-backed local authorities.
Russian officials have long charged that the insurgency is fuelled by foreign funding. They have also said that Georgia, which shares a mountainous border with Chechnya, has harboured Chechen rebel fighters.

#Russia: Georgia of aiding Al-Qaeda
You May Also like: