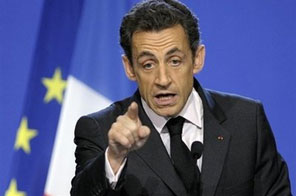 French President Nicolas Sarkozy, pictured, warned Tuesday of an extremist backlash if Middle East peace talks do not commence soon, as he headed to Riyadh for a one-day stay with Saudi King Abdullah. Source: AFP

RIYADH: French President Nicolas Sarkozy warned Tuesday of an extremist backlash if Middle East peace talks do not commence soon, as he headed to Riyadh for a one-day stay with Saudi King Abdullah.

"The priority is to restart as soon as possible the peace process," Sarkozy told the Saudi newspaper Ar-Riyadh in the interview published Tuesday.

"It is urgent because the current deadlock plays into the hands of extremists and each day the chance of peace is slipping away a little," the French president said.

Sarkozy arrives in the Saudi capital late Tuesday to spend the night at King Abdullah's desert ranch outside of Riyadh, in what officials described as a mostly personal visit aimed at tightening the bonds between the two leaders.

Middle East politics will be a key point of discussion with the 85-year-old Saudi ruler.

The Saudis, who revived the two-state-based Arab Peace Initiative earlier this year, are frustrated at the lack of progress towards reviving talks between the Israelis and the Palestinians.

Sarkozy meanwhile is taking a higher profile in Middle East issues, holding meetings with the leaders of Iraq, Israel and Syria in Paris during the past eight days.

No announcements are planned by either side during the visit, but Sarkozy and Abdullah are also expected to discuss French bids to sell helicopters, naval frigates and high-speed trains to Saudi Arabia, which is ploughing as much as 400 billion of dollars into national development over the next five years.

Also on the agenda for discussion is a French-Saudi agreement on peaceful nuclear cooperation, which officials on both sides say is pending final reviews and could be signed within a few months.

Though official, the visit is "personal in nature" to "invigorate ties" and "widen the scope of relations," said a Saudi government adviser involved in the arrangements.

The adviser said they would discuss particularly the Middle East peace process, Iran's nuclear threat, the situation in Iraq, and other issues of mutual interest.

Riyadh is particularly hoping Sarkozy can help get peace talks going after a "disappointing" effort by Washington, the adviser said.

"The deadlock in which we find ourselves today is extremely worrying," Sarkozy said.

"But sometimes in these moments of great tensions solutions arise, because they give the actors the courage and strength to move forward.

"It is for us to help them," Sarkozy added, citing in particular the United States, European Union and Russia.

Sarkozy's foreign minister, Bernard Kouchner, echoed his comments ahead of talks with Abbas in Amman later on Tuesday and with Israeli officials the next day in Jerusalem.

"I wish to insist on the urgency of restarting negotiations so that we can reach the aim of creating a Palestinian state, despite the difficulties," Kouchner told the Jerusalem-based Al-Quds daily. "We have to find ways to surmount the current obstacles."

It is the third trip to Saudi Arabia in two years for Sarkozy, who is putting efforts into building France's stature in the oil powerhouse where traditionally Britain and the United States have dominated western relations.

He is scheduled to leave Wednesday afternoon, make a brief stop in Qatar, and head back to Paris Wednesday evening.

#Sarkozy urges for peace talks
You May Also like: