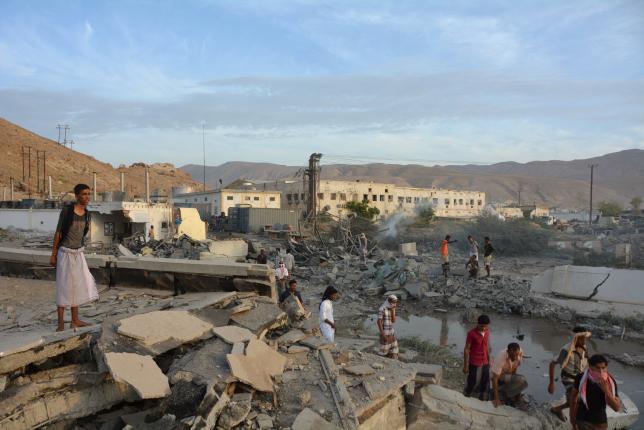 People inspect damage at a site hit by Saudi-led air strikes in the al Qaeda-held port of Mukalla city in southern Yemen April 24, 2016. REUTERS
The United Nations Security Council asked Secretary-General Ban Ki-moon on Monday to submit a broad plan within 30 days detailing how his Yemen envoy can help the warring Yemeni parties move towards peace. The Yemen civil war has killed more than 6,200 people, displaced more than 2.5 million others and caused a humanitarian catastrophe in one of the world's poorest countries. There has been a fragile ceasefire between Saudi-led coalition forces and Iranian-allied Houthis since April 10. The 15-nation Security Council unanimously adopted a statement that called on all Yemeni parties "to develop a roadmap for the implementation of interim security measures, especially at the local level, withdrawals, handover of heavy weapons, restoration of state institutions." It also asked Ban to "present a plan to the Security Council, within 30 days, outlining how the Office of the Special Envoy (Ismail Ould Cheikh Ahmed) could support the next phase of its work with the parties." Separately, Ban's spokesman, Stephane Dujarric, was asked about an announcement on Monday from the Saudi-led coalition that more than 800 al Qaeda militants were killed in an offensive by Yemeni government forces and its Arab allies in the group's main stronghold in the port city of Mukalla. "We haven't seen the cessation of hostilities we'd like to see," he told reporters at U.N. headquarters.
#United Nations #Yemen #Secretary-General Ban Ki-moon
You May Also like: