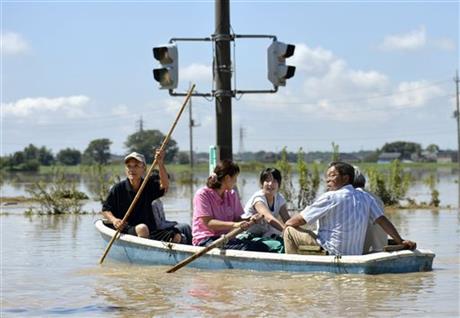 Residents paddle a boat past a traffic light in the flooded road in Joso, Ibaraki prefecture, northeast of Tokyo, Friday, Sept. 11, 2015. AP
JOSO: Houses lean forward, knocked partially off their foundations. The worst-hit are gone, their still-intact blue-tiled roofs left sitting on debris-strewn mud. The floodwaters have receded somewhat, but a vast area of the Japanese city of Joso remains inundated by a sea of brown water. As the sun came out Friday, shocked residents and officials began to take stock of the damage wrought the previous day when a rain-swollen river burst through its eastern bank, pouring in water so rapidly that many people could only clamber upstairs or to their roofs to escape. "We survived but it looks like some of our soybeans and rice didn't," said Keiko Iita, 70, who spent the night with her husband and son on the second floor of their house. She wore gloves and covered her face with a towel as she helped clean a neighbor's mud-coated barn. Farmers were clearing the mess in their fields and assessing the damage to their flattened soybean plants and other crops. Two days of torrential rain caused flooding and landslides across much of Japan this week. The Fire and Disaster Management Agency said three people died, including a woman in her 60s who was found after a landslide hit houses in Kanuma city, and a woman in her 40s who was in a car that washed away in Kurihara city. A man in his 20s died after falling into a drainage ditch in Nikko city. Some 300 kilometers (190 miles) north of Joso, another river overflowed into the city of Osaki on Friday morning, swamping homes and fields and stranding at least 60 people, according to media reports. But the hardest-hit place appeared to be Joso, 50 kilometers (30 miles) northeast of Tokyo. The fast-rising waters in the city of 60,000 people led to a series of dramatic rescues by helicopters on Thursday. Police and other emergency workers fanned out the next morning to search for the missing, while helicopters and boats brought in more of the stranded. More than 280 people have been airlifted out since the serious flooding began. City officials said 22 people were missing after they had lost contact with them following requests for rescue. Three others were injured, one seriously. More than 3,500 people were staying in schools, community centers and other buildings converted to evacuation centers. Hisako Sekimoto, 62, spent a sleepless night on the second floor of her flooded house with her husband and three cats before they were rescued by a military helicopter early Friday. Minutes after the flood gushed into the house Thursday afternoon, all of their furniture was floating and the water was up to her neck. "There was no time to escape, all we could do was go upstairs. It was horrifying," she said. "I kept praying the water wouldn't come upstairs." The evacuees arrived at an athletic field in the city, carrying a few clothes and food in shopping bags, some of them without shoes. Reiko Yamaji, 75, was stranded at a supermarket with dozens of other shoppers while she and her daughter-in-law Tomoko, 41, were buying rain boots. Part of the first floor was submerged under water. "We spent the night in the car parked on the rooftop parking lot. Water was cut and toilets were out of service, but I'm so glad we all survived," Yamaji said, turning a bit teary. She said her son, who was elsewhere in the city, was rescued by a boat. All told, 27 people have been injured by the storms in Japan, including three elderly women who were seriously hurt when strong winds knocked them over, the Fire and Disaster Management Agency said.
#Japan #flood
You May Also like: