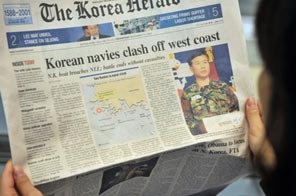 A S.Korean woman reads a newspaper reporting the clash of North and South Korean navies, in Seoul. A N.Korean patrol boat was set ablaze after exchanging fire with South's navy on November 10. Source: AFP

"We remain on high alert for possible provocations by the North," a defence ministry spokesman told AFP, while adding there had so far been no signs of any unusual movements by the North.

Sources quoted by local media said one North Korean sailor was killed and three wounded in the brief but intensive exchange of fire.

"We're fully prepared for any provocative acts. We'll keep a close watch on the North," Kim was quoted as telling Yonhap news agency.

South Korea has sent a destroyer to reinforce the border area, and two extra patrol boats, but has said it does not want the clash, which was the first such skirmish in seven years, to damage relations.

It has also ordered army, navy and air force commanders in charge of border areas to step up surveillance and respond immediately to any provocation.

North Korea vowed Friday to take "merciless" military action to protect its Yellow Sea border with South Korea and warned that Seoul would pay dearly for any future naval clash.

The North refuses to recognise the sea borderline set by the United Nations after the 1950-53 war and demands that it be drawn further to the south.

#SKorea keeps military on alert
You May Also like: