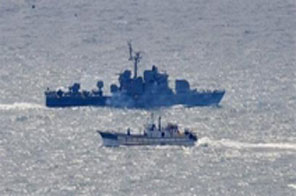 SEOUL: North Korea's navy accused South Korea Thursday of sending warships across their sea border and said the "reckless military provocations" could trigger armed clashes.
The communist state's naval command said that on Monday alone the "warmongers" had crossed the border 10 times on the grounds that North Korean fishing boats had intruded into the South's waters.
"The reckless military provocations by warships of the South Korean navy have created such a serious situation that a naval clash may break out between the two sides in these waters," the command said in a statement on the official news agency.
It said the incursions are part of "premeditated moves to deliberately escalate tension in the waters, a hotbed of conflict, and deteriorate the North-South relations once again.
"It is clear to everyone what consequences the third skirmish in the West Sea of Korea (Yellow Sea) will entail," the command said, adding that "warnings are bound to be followed by actions."
North Korea refuses to accept the Yellow Sea border known as the Northern Limit Line (NLL), which was unilaterally drawn by United Nations forces after the 1950-53 war.
There were bloody naval clashes between the two sides in 1999 and 2002.
The North frequently accuses the South of breaching the line. But Thursday's accusations came despite recent peace moves by Pyongyang.
Since August it has freed five South Korean detainees, eased curbs on the operations of a joint industrial estate, sent envoys for talks with President Lee Myung-Bak and given the go-ahead for resumption of a family reunion programme.
On Wednesday, in a rare admission of guilt, the North expressed regret for the death of six South Koreans last month. They were swept away in a cross-border flood after the North opened a dam's floodgates without warning.
A spokesman for South Korea's Joint Chiefs of Staff denied its ships violated the border.
"South Korean navy boats have never crossed the NLL into North Korean territorial waters," he told AFP. "The North, again, is trying to nullify the NLL with its usual claims."

#North Korea alleges border breach
You May Also like: