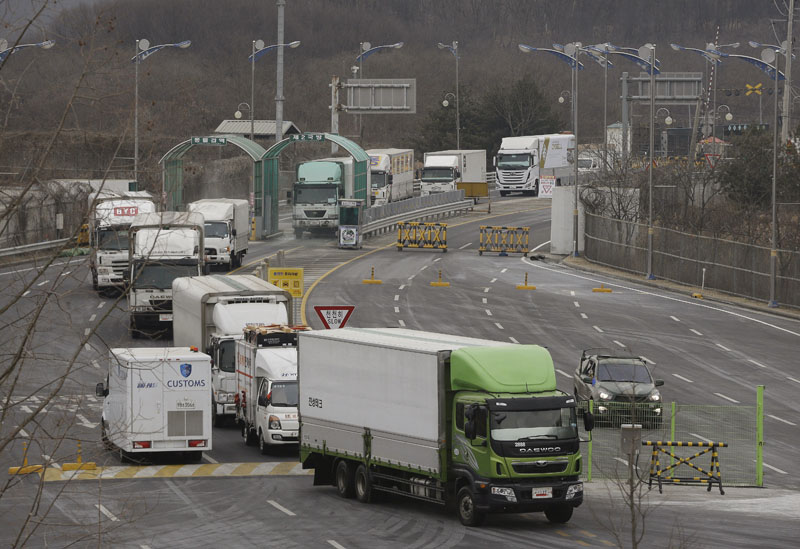 File - South Korean vehicles returning from North Korea's joint Kaesong Industrial Complex pass the customs, immigration and quarantine office near the border village of Panmunjom in Paju, South Korea, on Thursday, February 11, 2016. Photo: AP
Seoul, September 21 South Korea approved a plan today to send $8 million worth of humanitarian aid to North Korea, the South’s Unification Ministry said, as part of an aid policy that the government says remains unaffected by geopolitical tensions with the North. The aid decision was made after a meeting of government officials chaired by Unification Minister Cho Myong-gyon. It comes after the United Nations approved new sanctions against North Korea for its sixth nuclear test earlier this month. The South said it aims to send $4.5 million worth of nutritional products for children and pregnant women through the World Food Programme and $3.5 million worth of vaccines and medicinal treatments through UNICEF. The exact timing of when the aid will be sent, as well as its size, will be confirmed later, the ministry said in a statement. The WFP and UNICEF had approached the South Korean government in May and July this year to contribute in aiding North Korea, the statement added. “We have consistently said we would pursue humanitarian aid for North Korea in consideration of the poor condition of children and pregnant women are in there, apart from political issues,” said Cho in opening remarks at the meeting. Cho’s ministry had said earlier this month they were looking into giving North Korea aid, which launched a backlash of disapproval from both the public and opposition parties. It has dragged down South Korean President Moon Jae-in’s approval rating. Realmeter, a South Korean polling organisation, said today Moon’s approval rating stood at 65.7 percent, weakening for a fourth straight month. South Korea’s decision to mull over fresh aid to the North has caused a rift of concern in neighbouring Japan and the United States, according to government officials there, leading Japan Prime Minister Shinzo Abe to bring up the issue during a phone call with Moon last week. The last time the South had sent aid to the North was in December 2015.
#South Korea #North Korea #World Food Programme #Geopolitical tensions #WFP #humanitarian aid to North Korea #aid policy #nutritional products
You May Also like: