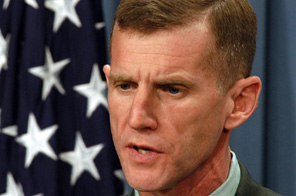 KABUL: US General Stanley McChrystal took command of nearly 90,000 US- and NATO-led troops in Afghanistan Monday, tasked with turning around the war against the Taliban as attacks reach record levels.
McChrystal was appointed after his predecessor was sacked in May when the United States said it needed "new thinking" in a war that is gaining pace, nearly eight years after the extremist Taliban regime was ousted in 2001.
At a small ceremony at the Kabul headquarters of NATO's International Security Assistance Force (ISAF), the former commander of special operations forces in Iraq and Afghanistan said the struggle ahead would be hard.
He emphasised the importance of protecting Afghan civilians on whose support and trust the mission depended.
"If we gain that trust, we cannot lose. If we lose that trust, we cannot win," he told soldiers and civilians at the event.
"The Afghan people are in the centre of our mission. In reality they are our mission. We must protect them from violence whatever its nature," he said.
His predecessor, General David McKiernan, was removed as the US military was accused of one of its deadliest incidents involving civilians since the 2001 invasion.
US war planes targeting Taliban positions in the southwestern province of Farah on May 4 struck compounds where locals said villagers had taken shelter from fighting between insurgents and the security forces.
An Afghan government probe said 140 civilians were killed. The US military admitted to some mistakes in the operation but issued a far lower death toll -- 20-30 civilians killed as well as around 60 militants.
President Hamid Karzai reminded McChrystal in talks Sunday of the military's obligation to protect civilians, the president's office said in a statement.
"The most important element of the mission of the new NATO/coalition forces commander in Afghanistan is to protect the civilian population during the anti-terrorism military operations," Karzai was quoted as telling the general.
At the assumption of command ceremony, McChrystal vowed that "while operating with care, we will not be timid."
He noted that a "significant" number of ISAF troops would deploy into militants' strongholds and work with the growing Afghan forces to unhinge the nexus between insurgents and the opium trade, from which the rebels earn money.
There are 56,000 US troops in Afghanistan, serving in ISAF and the US-led coalition, as well as around 33,000 from other mostly Western nations, according to Pentagon figures. In Iraq there are 133,000 US troops.
A new US strategy on Afghanistan, unveiled by President Barack Obama, includes the ongoing deployment of 17,000 US troops, around 7,000 of whom are already in place. Thousands more are coming in to protect August 20 elections.
Insurgent attacks have meanwhile reached record levels while troops have also been stepping up operations in an effort to clear out insurgent strongholds ahead of elections, Afghanistan's second-ever presidential vote.
Regional US commander General David Petraeus said Thursday that the past week had seen the highest level of security incidents since 2001 and warned of "tough months ahead."
Insurgent-initiated attacks from January to May this year were about 60 percent higher than those for the same period last year, ISAF spokesman Canadian Brigadier General Richard Blanchette has told AFP.
Afghan Interior Minister Mohammad Anif Atmar said Sunday that Taliban rebels would try to turn this summer into the "bloodiest" yet to show their strength in the face of US troop reinforcements.
In a new battle reported Monday, 23 insurgents were killed in the southern province of Uruzgan on Sunday when security forces responded after coming under attack while on patrol, the US military said.
A Canadian soldier was killed the same day in an explosion in the southern province of Kandahar, Ottawa said, bringing to 136 the number of foreign soldiers to have died in Afghanistan so far this year.