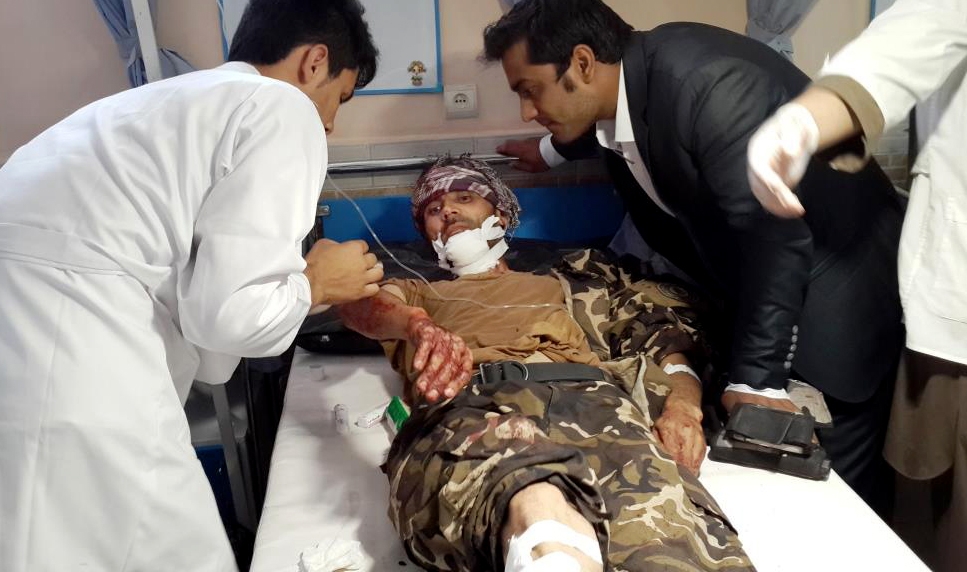 Afghan medics help an injured man receive treatment at a hospital after a suicide attack in Faryab province northern of Kabul, Afghanistan, Wednesday, July 22, 2015. More than a dozen people are dead and at least 38 people wounded after a suicide bomber detonated his explosives-laden vest among a crowd of shoppers at a market in northern Afghanistan Wednesday. Photo: AP
KABUL: A suicide bomber attacked a market crowded with shoppers Wednesday in northern Afghanistan, killing at least 19 people and wounding 38 amid other Taliban assaults in the area, authorities said. No one immediately claimed responsibility for the powerful blast in Faryab province's Almar district, but suspicion immediately fell on the Taliban. Overnight, there had been an Afghan military operation targeting the insurgents in the same district. The attack happened on a weekly shopping day for the area, meaning the market teemed with shoppers and soldiers protecting it when the bomber detonated his explosive vest, police said. The "target of the attacker was military forces that were present in the area but the majority of the victims were innocent civilians," deputy provincial police chief Baryalia Basharyar said. Both Abdul Satar Barez, the acting provincial governor, and Sayed Masoud Yaqiubi, a spokesman for the provincial police chief, gave the casualties figures. Barez also said he feared the final death toll may be higher as many among the wounded were in critical condition. The United Nations Mission in Afghanistan condemned the attack, saying it showed insurgents' "appalling disregard for human life." Taliban insurgents have stepped up their attacks on Afghan soldiers and police in recent months. US and NATO troops formally ended their combat mission at the end of last year, leaving Afghan forces in charge of security in the country. In neighboring Zawzjan province, a patrol of the security forces belonging to the country's first vice president, Abdul Rashid Dostum, also came under attack late Tuesday night, said Sultan Faizy, a spokesman for the official. Faziy said that one insurgent was killed and a second attacker arrested after he was wounded by security forces.
#United Nations #Afghanistan #Taliban attack #Afghanistan unrest #bomb attack #Afghanistan bombing #Afghan military #Almar district #Faryab province
You May Also like: