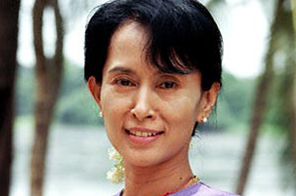 YANGON: Lawyers for democracy icon Aung San Suu Kyi urged Myanmar's top court Wednesday to allow two key aides to testify at her trial, despite efforts by the ruling junta to bar them from the witness box.

In a case that has drawn international condemnation, the Nobel laureate faces up to five years in jail on charges of breaching her house arrest after an American man swam uninvited to her lakeside home in May.

A court at Yangon's Insein prison last month barred two senior members of her National League for Democracy (NLD) from giving evidence, but the Supreme Court agreed to hear an appeal against the decision.

"We gave our arguments to the Supreme Court for about one hour today. They could make a decision any time, we have to wait and check the court list every day," NLD spokesman and defence lawyer Nyan Win said.

The two barred witnesses are Win Tin, a journalist who was Myanmar's longest-serving political prisoner until his release in September, and detained deputy NLD leader Tin Oo.

Nyan Win said the prosecution argued it was "impossible" for Tin Oo to appear because he was being held under a security law, while Win Tin had given interviews to foreign media "which they said would affect the judgement."

"So I replied to them that Daw Aung San Suu Kyi appears at the court while she is in detention, so why can Tin Oo not appear at the court?" Nyan Win told reporters.

"Regarding Win Tin I said it was his right to speak freely and has nothing to do with the court, but his speech might be disturbing for the authorities."

Security was tight for the hearing, with around 20 police trucks patrolling streets near the Supreme Court building in Yangon.

Aung San Suu Kyi's lawyers earlier this month successfully appealed against a ban on a third witness, while a fourth has already testified.

The prosecution has so far called 14 witnesses, adding to opposition and international claims that the proceedings are a show trial designed to keep the democracy icon locked-up ahead of elections scheduled by the regime for 2010.

US national John Yettaw and Aung San Suu Kyi's two live-in aides are also on trial and face a similar sentence. All are being held at Insein jail, Myanmar's most notorious detention centre.

Aung San Suu Kyi has spent 13 of the last 19 years in detention since Myanmar's ruling junta refused to recognise the NLD's landslide victory in the country's last democratic polls in 1990.

The UN envoy to Myanmar, Ibrahim Gambari, may visit the country later this week ahead of a possible trip by Secretary General Ban Ki-moon in early July, officials and diplomats say.

"We hope to meet Mr Gambari when he comes, as we did on his previous visits," Nyan Win said. "We always welcome the United Nations envoy as it means we can hope for something."

Aung San Suu Kyi on Monday thanked people around the world who sent her birthday wishes and called for her immediate release as she turned 64 in jail last week.

The charges against Aung San Suu Kyi come amid a wide-ranging crackdown on the opposition that has been carried out since the ruling generals crushed protests led by Buddhist monks in 2007.

Myanmar, formerly known as Burma, has been ruled by the military since 1962.

#Suu Kyi lawyers urge for witnesses
You May Also like: