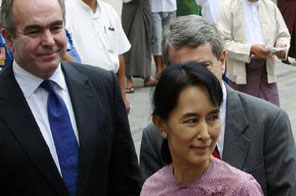 A file photo of Aung San Suu Kyi (L) in Yangon November 4, 2009. San Suu Kyi will be freed when her house arrest ends in November, according to a government minister quoted by witnesses on Monday, but critics said that may be too late for this year's elections. Source: Agecies

YANGON: Reports that a top Myanmar leader said detained opposition leader Aung San Suu Kyi would be released in November, when her house arrest ends, have only served to lower hopes that she might be freed ahead of this year's elections, her party said Monday.
Nyan Win, a spokesman for the National League for Democracy party, said the comment purportedly made last week by Home Minister Maj. Gen. Maung Oo was "nothing new or extraordinary."
"If the media reports were correct, hopes for Daw Aung San Suu Kyi's earlier release under the executive order were dashed," said Nyan Win, who is also a lawyer for the 64-year-old Suu Kyi. "Daw" is a term of respect used for older women in Myanmar, also known as Burma.
News reports on U.S.-government backed Radio Free Asia and elsewhere cited witnesses as saying Maung Oo in a Jan. 21 speech declared Suu Kyi would be freed in November. The reports said he spoke at a meeting of several hundred officials in Kyaukpadaung, a town about 350 miles (560 kilometers) north of Yangon.
Reports also quoted Maung Oo as saying the elections would be "free and fair."
Suu Kyi's party and pro-democracy activists have complained the constitution that established the polls was undemocratic and unfair. It includes provisions that bar the democracy icon from holding office and ensure the military a controlling stake in government.
Suu Kyi's party has not yet decided whether to take part in the election, the date of which has not yet been set.
Suu Kyi has been detained for 14 of the past 20 years. She was sentenced last August to 18 months' house arrest, with three months in detention awaiting the end of the trial counted toward the total.
The National League for Democracy party swept the last elections in 1990, but the results were never honored by the military, which has ruled the country since 1962.

#Suu Kyi release report played down
You May Also like: