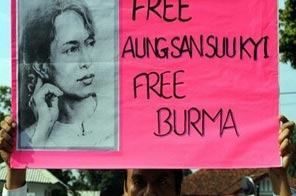 YANGON: Myanmar pro-democracy icon Aung San Suu Kyi is bracing for a verdict on her appeal against her extended house arrest, a case that could affect improving ties between Washington and the ruling junta.

A court in Yangon is due on Friday to announce whether it will uphold the Nobel Laureate's conviction in August over an incident in which an American man swam uninvited to her house, earning her an extra 18 months in detention.

The 64-year-old Suu Kyi is not expected to be allowed to attend the hearing but her lawyers, who will be in court on her behalf, said they still hoped for her unconditional release.

"Of course we are hoping for the best," Nyan Win, her lawyer and spokesman for her National League for Democracy (NLD) party, said on Thursday.

"We have prepared what we need. The result will depend on the court and we are hoping for the immediate release of Daw Suu," he told AFP. Daw is a term of respect in Myanmar.

The military-ruled country faces intense international pressure to free Suu Kyi, especially from the United States, which Wednesday held the highest-level talks with Myanmar in nearly a decade.

The Obama administration's decision to re-engage with Myanmar comes after years of stalemate proved unproductive but Washington has warned against lifting sanctions until the junta moves on democracy.

"Lifting or easing sanctions at the outset of a dialogue without meaningful progress on our concerns would be a mistake," said Kurt Campbell, US assistant secretary of state for Asian affairs, after meeting the Myanmar delegation.

He said the US side laid out clear demands for the regime, including freeing political prisoners such as Suu Kyi.

But a western diplomat based in Bangkok, speaking on condition of anonymity, doubted this would affect the appeal, saying that it was likely the court would either reject the appeal or delay its decision.

"Everybody has big expectations but it's not going to result in immediate action. They are not going to give away their best asset so easily after one meeting -- I highly doubt it," the diplomat told AFP.

The diplomat pointed out that judges could grant leave for lawyers to appeal to a higher court.

Suu Kyi has spent most of the past two decades under house arrest. Her NLD won the country's last elections in 1990, which the ruling generals refused to acknowledge, leading the US and European Union to impose sanctions on Myanmar.

Her extended house arrest now keeps Suu Kyi off the scene for elections promised by the regime for 2010, adding to widespread criticism that the polls are a sham designed to legitimise the junta's grip on power.

In August a court at Yangon's notorious Insein prison originally sentenced the frail 64-year-old to three years' hard labour but junta chief Than Shwe reduced that to 18 months house arrest.

John Yettaw, the eccentric American who triggered the debacle by swimming to her lakeside mansion in May, was sentenced to seven years' hard labour but the regime freed him following a visit by US Senator Jim Webb.

#Suu Kyi set for appeal verdict
You May Also like: