Suu Kyi to appeal for witnesses 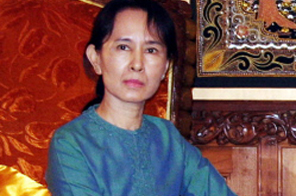 YANGON: Myanmar's highest court said Wednesday it will allow a final appeal by Aung San Suu Kyi's defense lawyers, who are seeking to reinstate two key witnesses at her widely watched trial, her lawyer said.
Defence lawyer Nyan Win called the development "good news" and said the High Court was expected to set a date for the appeal on Friday.
Four truckloads of armed riot police circled the court, and two trucks mounted with machine guns and filled with riot police were parked outside. Tight security is standard on days of Suu Kyi hearings.
Suu Kyi is charged with violating the terms of her house arrest when an uninvited American man swam secretly to her closely guarded lakeside home last month and stayed two days.
The hearing has drawn outrage from the international community and Suu Kyi's local supporters, who say the military government is using the bizarre incident as an excuse to keep the Nobel Peace Prize laureate detained through next year's elections.
Suu Kyi's trial, which started May 18, has been delayed to allow appeals for more defense witnesses. Nyan Win said the High Court appeal would cause further delays to the trial, which was scheduled to resume June 26.
The District Court trying Suu Kyi initially allowed only one of four defense witnesses to take the stand. On appeal, the Yangon Divisional Court ruled last week that a second witness could be heard. Two senior members of Suu Kyi's National League for Democracy party - Tin Oo and Win Tin - remain barred from giving testimony.
"This is good news. Now that the court has decided to hear our appeal, chances are higher that Tin Oo and Win Tin will be allowed to testify as defense witnesses," said Nyan Win.
It is widely expected that Suu Kyi will be found guilty. Courts in Myanmar are known for handing out harsh sentences to political dissidents.
If convicted, the 63-year-old faces up to five years in prison.
Several global campaigns have been launched ahead of Suu Kyi's 64th birthday Friday, which she will spend in Yangon's Insein prison.
Suu Kyi, who has been detained for more than 13 of the last 19 years, was transferred to prison on May 14.
In New York, a delegation of former prisoners and activists has delivered a petition signed by nearly 680,000 people urging U.N.
Secretary-General Ban Ki-moon to make the release of more than 2,100 political prisoners in Myanmar, including Suu Kyi, a "personal priority." Hollywood celebrities, world leaders and others are tweeting and sending messages to a Web site in a separate campaign called "64 words for Aung San Suu Kyi." Activist groups have also gathered the signatures of 107 former or current political prisoners from more than 20 countries calling for freedom for Myanmar's jailed dissidents.
Suu Kyi's party won the country's last elections in 1990 but was not allowed to take power by the military, which has run the country since 1962.

#Court allows Suu Kyi to appeal for more witnesses
You May Also like: