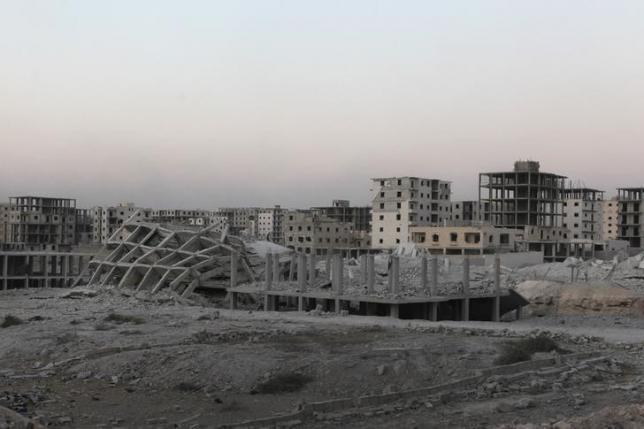 Damaged buildings are seen in the 1070 Apartment Project area in southwestern Aleppo, Syria August 5, 2016. REUTERS
Syrian government forces and their allies bombarded insurgents in southwestern Aleppo on Tuesday, close to where rebels recently opened a corridor into the city's opposition-held eastern sector, pro-Damascus media reported. Hezbollah's Al Manar TV said government forces had advanced to cut off rebel progress into opposition-held areas of Aleppo. A rebel official denied any government advance in the area. Fighting in Syria's five-year civil war has in recent months focussed on Aleppo, Syria's largest city before the conflict. Nearly 2 million people still live there. Aleppo is split between the government-controlled west and rebel territory in eastern neighbourhoods, which last month government forces put under siege by cutting the opposition supply route from the north. Rebels effectively broke that siege in an assault on a major government military complex on Aleppo's southwestern outskirts on Saturday, opening a corridor linking the eastern sector with insurgent territory. At the same time, they cut the main supply route to government-held Aleppo, raising the prospect of insurgents in turn besieging those areas. On Tuesday, government forces backed by intense aerial bombardment recaptured some terrain and closed off the rebel corridor, pro-Damascus media outlets including Hezbollah's Al Manar TV reported. Lebanese Shi'ite Muslim group Hezbollah fights on the side of Syrian President Bashar al-Assad. A rebel official denied there had been a government gain. "There's no advance, nothing," said Abu al-Hasanein, a senior commander in Fateh Halab, the coalition of moderate rebel groups inside the city. "The situation is good. There's a lot of bombing, but the brothers (fighters) are taking cover, until they start a new phase" in the battle, he said. Ahmed Hamaher, a spokesman for the Nour al Din al-Zinki insurgent group, said government forces had briefly overrun an area called Telat al-Snobarat, as reported by a pro-Damascus channel, but had been beaten back and the territory was recovered by rebels. The Syrian Observatory for Human Rights said government forces had not taken control of the southwestern areas that would cut the rebel corridor, but had temporarily blocked movement of insurgents with bombardments. The British-based monitoring group said Hezbollah fighters were involved in the battles.
#Syria #rebels #Aleppo
You May Also like: