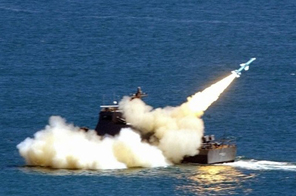 A Hsiungfeng missile is seen being launched by the Taiwan navy during wargames in 2003. Source: AFP

TAIPEI: Taiwan's military is probing the failure of its largest-ever missile exercise, carried out less than a fortnight after China showed off its advanced ballistic weaponry, a report said Saturday.

The missiles malfunctioned during a test on Tuesday at the Chiupeng base in southern Taiwan, forcing the launch to be abandoned, the United Daily News reported, citing unnamed military sources.

Military officials were quoted as saying that they are investigating the cause of the failure but added that such problems were inevitable during the research and development phase of any weaponry.

Taiwan's President Ma Ying-jeou was present at the test, which came after China marked 60 years of communist rule on October 1 with a parade of high-tech weapons in Beijing.

Ties between Taipei and Beijing have improved markedly since Ma came to power in May last year, pledging to boost trade and allow in more Chinese tourists.

However, Beijing, which still regards Taiwan as part of its territory awaiting reunification, has refused to renounce the use of force in dealing with Taiwan.

China has more than 1,000 ballistic missiles trained on the island, according to Taiwan's defence officials.

#Taiwan probes missile test failure
You May Also like: