Trump praises Putin for holding back in US-Russia spy dispute 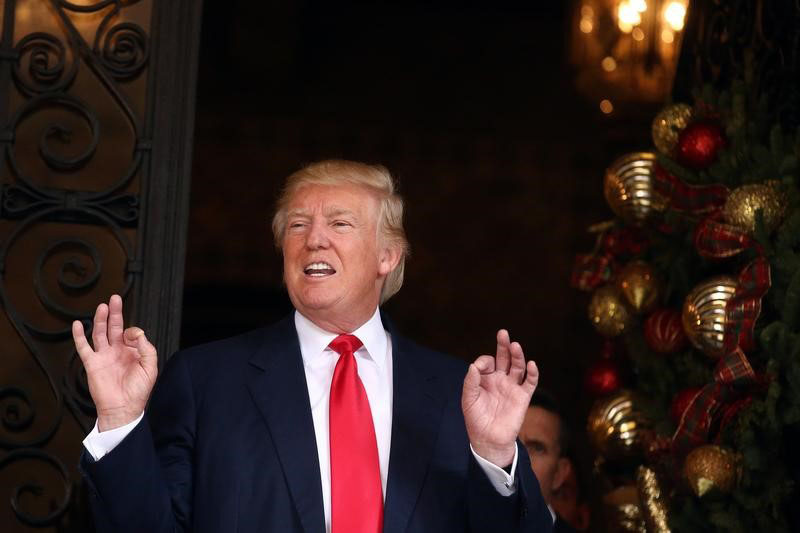 US President-elect Donald Trump in Palm Beach, Florida, US, on December 21, 2016. Photo: Reuters
PALM BEACH / MOSCOW: US President-elect Donald Trump on Friday praised Russian President Vladimir Putin for refraining from retaliation in a dispute over spying and cyber attacks, in another sign that the Republican plans to patch up badly frayed relations with Moscow. Putin earlier on Friday said he would not hit back for the US expulsion of 35 suspected Russian spies by President Barack Obama, at least until Trump takes office on January 20. "Great move on delay (by V Putin) - I always knew he was very smart!" Trump wrote on Twitter from Florida, where he is on vacation. Obama on Thursday ordered the expulsion of the Russians and imposed sanctions on two Russian intelligence agencies over their involvement in hacking political groups in the November 8 US presidential election. "We will not expel anyone," Putin said in a statement, adding that Russia reserved the right to retaliate. "Further steps towards the restoration of Russian-American relations will be built on the basis of the policy which the administration of President D. Trump will carry out," he said. In a separate development, a code associated with the Russian hacking operation dubbed Grizzly Steppe by the Obama administration has been detected within the system of a Vermont electric utility, the Washington Post reported on Friday, citing unnamed US officials. The Russians did not actively use the code to disrupt operations of the utility, the officials told the Post, but penetration of the nation's electrical grid is significant because it represents a potentially serious vulnerability. Trump has repeatedly praised Putin and nominated people seen as friendly toward Moscow to senior administration posts, but it is unclear whether he would seek to roll back Obama's actions, which mark a post-Cold War low in US-Russian ties. Trump has brushed aside allegations from the CIA and other intelligence agencies that Russia was behind the cyber attacks." It's time for our country to move on to bigger and better things," Trump said on Thursday, though he said he would meet with intelligence officials next week. US intelligence agencies say Russia was behind hacks into Democratic Party organizations and operatives before the presidential election. Moscow denies this. US intelligence officials say the Russian cyber attacks aimed to help Trump defeat Democrat Hillary Clinton. Russian officials have portrayed the sanctions as a last act of a lame-duck president and suggested Trump could reverse them when he takes over from Obama, a Democrat. A senior US official on Thursday said that Trump could reverse Obama's executive order, but doing so would be inadvisable. Russian Foreign Ministry spokeswoman Maria Zakharova called the Obama administration "a group of embittered and dimwitted foreign policy losers." REPUBLICAN OPPOSITION Should Trump seek to heal the rift with Russia, he might encounter opposition in Congress, including from fellow Republicans. Republican John McCain, chairman of the Senate Armed Services Committee, said on Friday that Russia must face a penalty for the cyber attacks. "When you attack a country, it's an act of war," McCain said in an interview with the Ukrainian TV channel "1+1" while on a visit to Kiev. "And so we have to make sure that there is a price to pay, so that we can perhaps persuade the Russians to stop these kind of attacks on our very fundamentals of democracy," added McCain, who has scheduled a hearing for Thursday on foreign cyber threats. Other senior Republicans, as well as Democrats, have urged a tough response to Moscow. A total of 96 Russians are expected to leave the United States including expelled diplomats and their families. Trump will find it very difficult to reverse the expulsions and lift the sanctions given that they were based on a unanimous conclusion by US intelligence agencies, said Eugene Rumer, who was the top US intelligence analyst for Russia from 2010 until 2014. But that might not prevent Trump from improving ties to Russia, said Rumer, now director of the Russia and Eurasia Program at the Carnegie Endowment for International Peace, a policy institute. "If Mr. Trump wants to start the relationship anew, I don’t think he needs to walk these sanctions back. He can just say this was Obama’s decision,” said Rumer. As part of the sanctions, Obama told Russia to close two compounds in the United States that the administration said were used by Russian personnel for "intelligence-related purposes." Convoys of trucks, buses and black sedans with diplomatic license plates left the countryside vacation retreats outside Washington and New York City without fanfare on Friday. A former Russian Foreign Ministry employee told Reuters that the facility in Maryland was a dacha used by diplomatic staff and their children. The 45-acre complex includes a Georgian-style brick mansion, swimming pool, tennis courts and cottages for embassy staff. Neighbors said the Russians were a lively bunch, seen water-skiing in summer and known for throwing a large, annual Labor Day party. The Russian consulate in San Francisco said on its Facebook page, "We hate to have to say goodbye to close to a dozen of our colleagues, our friends." Among those expelled was the consulate chef. Obama had promised consequences after US intelligence officials blamed Russia for hacks intended to influence the 2016 election. Officials accused Putin of personally directing the efforts and primarily targeting Democrats. Washington also put sanctions on two Russian intelligence agencies, the GRU and the FSB, four GRU officers and three companies that Obama said "provided material support to the GRU’s cyber operations."
#Vladimir Putin #Hillary Clinton #Donald Trump #Barack Obama #US President-elect #Russia cyber attack
You May Also like: