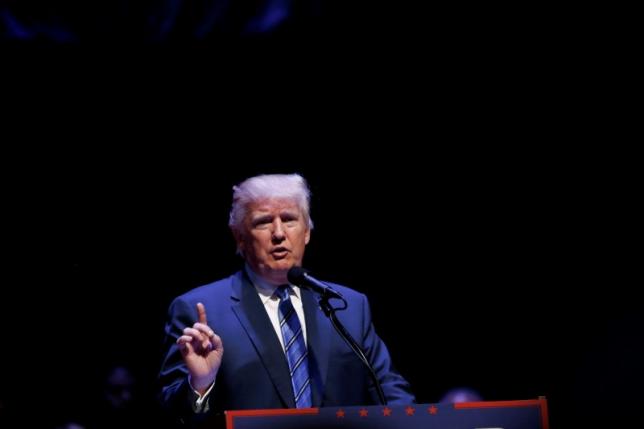 Republican US presidential nominee Donald Trump attends a campaign event at the Merrill Auditorium in Portland, Maine August 4, 2016. REUTERS
WASHINGTON: Republican presidential candidate Donald Trump’s team of economic policy advisers is packed with moguls from the hedge fund and investment banking industries that he has railed against in the past. And none of them are women - a demographic group he needs to court if he hopes to win in November. Trump’s campaign has been powered by a populist message that criticizes corporate America for outsourcing jobs, profiting at the expense of everyday workers and buying influence in Washington. The message resonates best with middle-class and working-class voters buffeted by the forces of globalisation. But among the members of the 13-member team of advisers announced on Friday are hedge-fund billionaire John Paulson and investment bankers Steve Feinberg and Andy Beal, as well as a former top steel executive and a former high-ranking US government official. "‎It is a hallowed campaign tradition. Malign an industry, but court its wealthy big shots," said Erik Gordon, a professor of law and business at the University of Michigan. The reliance on Wall Street executives comes after Trump spent much of his primary campaign lambasting the industry for paying too little in taxes. "The hedge fund guys are getting away with murder,” Trump said in an interview last year. One of the best known of Trump's panel is Paulson, whose bet against the overheated housing market in 2007 netted him and his investors billions of dollars. His bets have since gone the other way, losing some $15 billion in the last five years. Don Steinbrugge, managing partner at investment consulting firm Agecroft Partners LLC, said Trump could benefit from his advisers' expertise on global capital markets if he "would listen to them.” Whether Trump will heed the counsel of his conservative-leaning economic advisers or steer his own course was also raised by Lanhee Chen, who served as a top policy aide to Republican presidential candidate Mitt Romney in 2012. "It’s hard to see a consistent strain of conservative economic thought," Chen said, citing Trump’s protectionist policies on trade as an example of where Trump differs from the Republican party’s free-market economic orthodoxy. The panel also includes former steel executive Dan DiMicco; oil magnate Harold Hamm; Howard Lorber, the CEO of tobacco company Vector Group Ltd; Trump campaign finance chairman Steven Mnuchin, a former partner at Goldman Sachs who is now chairman and CEO of private investment firm Dune Capital Management LP; and David Malpass, a former official of the US Treasury and State departments. James Pethokoukis, an economist with the conservative American Enterprise Institute, noted the absence of representatives from the tech and venture capital sectors. "If I was assembling a task force to analyse the big challenges facing the American economy and to develop solutions, I am not sure that a group like this would naturally spring to mind," he said. But the panel fits with the themes of Trump’s campaign in another way. Trump often has boasted about bringing in successful business people to tackle Washington’s entrenched problems, and many of Trump's supporters see his background in business as among his biggest assets. GUY WITH A BINDER Some critics seized upon the lack of women on Trump’s panel. After being asked this week to identify women he might appoint to his cabinet if elected, Trump could only respond with the name of his daughter Ivanka. Democratic rival Hillary Clinton hit Trump on the comment in a Twitter post, comparing him to Romney who, when asked a similar question during his campaign, said he’d reviewed “binders full of women.” “We know a guy with a binder, @realDonaldTrump. (He might not take your calls, though.)” Clinton’s campaign wrote. The campaign declined to comment on Trump's advisers. Trump has struggled with women voters since his campaign began. Some 65 percent of women have an unfavourable view of Trump, according to Reuters/Ipsos polling, compared with 53 percent who have an unfavourable view of Clinton. Kellyanne Conway, a pollster who works for the Trump campaign, said the emphasis on gender on the economic team is misplaced. Women voters, she said, care more about their economic well-being than the make-up of an advisory group. “What female voters wish to know is whose economic plan will be better for them,” she said.
#Donald Trump #America #University of Michigan
You May Also like: