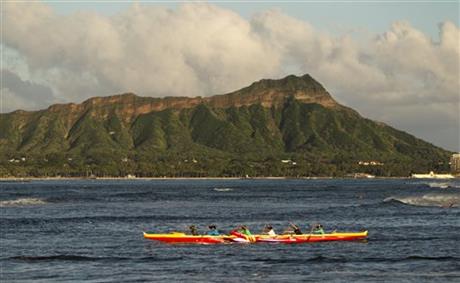 A outrigger canoe paddles past Diamond Head mountain, Wed. Sept. 16, 2015 in Honolulu. A powerful magnitude-8.3 earthquake hit off Chile's northern coast Wednesday night putting Hawaii under a tsunami advisory. AP
HONOLULU: Hawaii and part of California's coast are under tsunami advisories after an 8.3-magnitude earthquake off the coast of north Chile. The Pacific Tsunami Warning Center had originally issued a watch for Hawaii, saying a tsunami may have been generated by Wednesday's earthquake. They later downgraded the alert to an advisory, saying that current data indicated there would be no major tsunami in the state, but that sea-level changes and dangerous currents could pose a threat to those in or near the water. The center estimated that the effects from the tsunami would arrive in Hawaii about 3 a.m. (6 a.m. PDT) Thursday. A similar advisory was issued for southern and central California. That advisory affects about 300 miles of coastline stretching from the southern end of Orange County to most of San Luis Obispo County on the central coast. The possible changes associated with the advisory are expected to hit first in the south at about 4:45 a.m. PDT Thursday and move north in the minutes that follow. A watch means that a tsunami is possible, but it doesn't mean it will happen, said Chevy Chevalier, a meteorologist with the National Weather Service in Honolulu. "A watch is for everybody to be aware of it, that it's a possibility," he said. "A warning means it's happening right now or it's imminent." The powerful earthquake shook Chile's capital, causing buildings to sway and people to take refuge in the streets. Authorities say at least five people died. Damage as reported in some coastal towns that saw flooding from small tsunami waves. A tsunami warning was last issued for Hawaii in 2012, after a powerful earthquake off the coast of Canada. The Pacific Tsunami Warning Center lifted its tsunami advisory three hours after downgrading from a warning and less than six hours after the waves first hit the islands. The state was spared from severe surges. The Hawaii Emergency Management Agency said state officials are standing by, awaiting updates from the warning center. On the Big Island, officials were bracing to be the first island affected, county spokesman Ilihia Gionson said. Officials were gathered Wednesday in the county's emergency operations center in Hilo, he said. "It's too early to tell," he said. "This early it's best to just stay informed."
#Chile #California #Hawaii #Tsunami #8.3 earthquake
You May Also like: