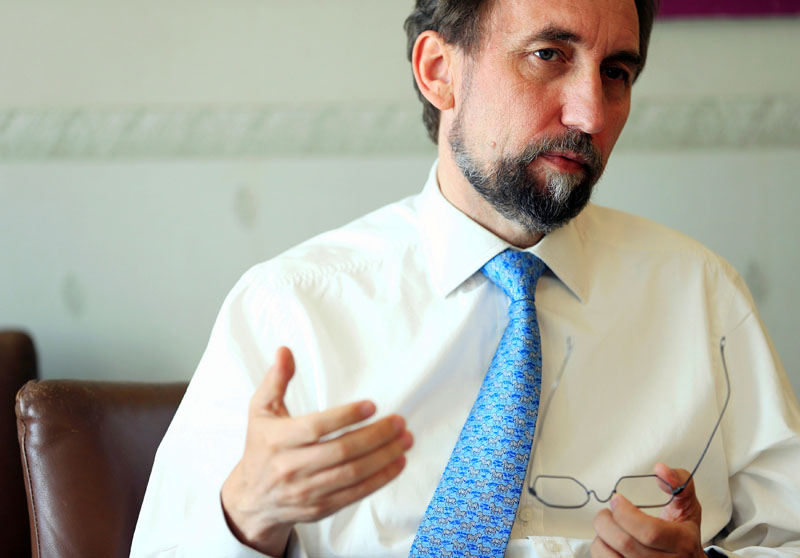 United Nations High Commissioner for Human Rights Zeid Ra'ad Al Hussein gestures during an interview with Reuters in Geneva, Switzerland, August 10, 2016. Photo: REUTERS
Turkey on Saturday criticised a top chuman rights official for saying Ankara should stem its "thirst for revenge" after a failed coup attempt and denied people's rights were being violated in a purge of officials and professional ranks. UN High Commissioner for Human Rights Zeid Ra'ad Al Hussein called on Ankara this week to uphold the rights of detainees held since the July 15-16 abortive putsch. Authorities have suspended, detained or begun investigating tens of thousands of soldiers, police, judges, journalists and civil servants. Turkish foreign ministry spokesman Tanju Bilgic, in a statement, said Zeid's comments were unacceptable. "It is at best an unfortunate statement for a UN official tasked with guarding human rights to say 'he has no sympathy' for coup plotters instead of condemning these terrorists who have attempted a bloody coup," Bilgic said. Western allies worry that President Tayyip Erdogan is using the putsch and the purge that has followed to tighten his grip on power. But many Turks are angered by what they see as a lack of Western sympathy over a violent coup attempt by a rogue faction in the Turkish military using fighter jets, helicopters and tanks in which 240 people died. Erdogan vowed to rid Turkey of the network of US-based cleric Fethullah Gulen, whose followers in the security forces, judiciary and civil service he accuses of orchestrating the attempted power grab and of plotting to overthrow the state. Gulen denies these charges. Bilgic said Turkey's measures following the coup have been consistent with the fundamental principles of rule of law and human rights and repeated Ankara's calls for the Commissioner to visit the country.
#Tayyip Erdogan #Human rights #Turkish Foreign Ministry
You May Also like: