Turkey's Erdogan arrives in Russia for talks with Putin 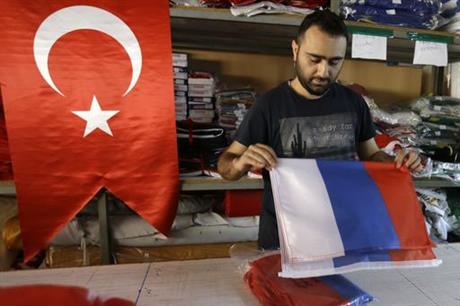 An employee of a flag-making factory folds a Russian flag as a Turkish flag adorns the display at left, in Istanbul, Tuesday, Aug. 9, 2016. AP
ST. PETERSBURG: Turkish President Recep Tayyip Erdogan has arrived in Russia for talks with Russian President Vladimir Putin aimed at repairing ties shattered by Turkey's downing of a Russian warplane along the Syrian border last year. With Tuesday's visit, Erdogan may also be hoping to play the Russian card to strengthen his hand in disputes with the United States and European Union. For his part, Putin is interested in mending the rift with Turkey in the hopes of reviving key economic projects, including a much-touted pipeline to carry natural gas to Turkey, and expanding Russia's clout in Syria. The downing of the Russian jet in November, which Putin described as a "treacherous stab in the back," came amid boiling tensions over Syria, where Moscow and Ankara back opposing sides in the war.
#Turkey #European Union #Russia #Vladimir Putin #Recep Tayyip Erdogan
You May Also like: