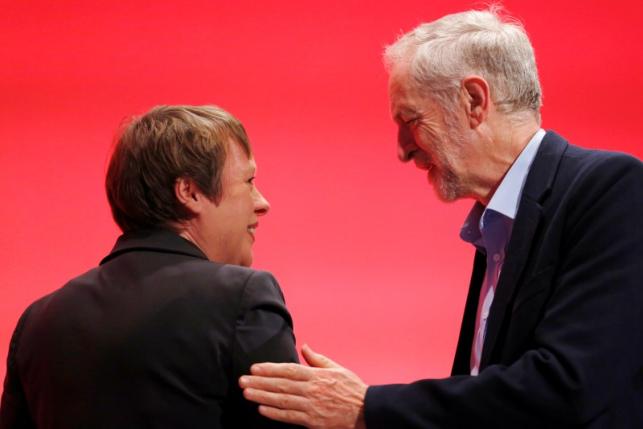 Britain's opposition Leader of the Labour Party Jeremy Corbyn touches shadow defence secretary Angela Eagle as she leaves stage at the annual Labour Party Conference in Brighton, southern Britain 28 September, 2015. REUTERS
LONDON: Britain's main opposition Labour Party headed for a leadership battle, mirroring a fight for control of the ruling Conservative Party, after the decision by voters to leave the European Union last week led to upheaval in Westminster. Angela Eagle, a senior Labour lawmaker, will announce on Thursday that she will challenge leader Jeremy Corbyn who has been facing a growing revolt within the party, media reports said on Wednesday. Eagle, a former pensions minister, quit as Labour's top business official on Tuesday, one of more than 20 people to resign from Corbyn's opposition policy team. Among the Conservatives, a leadership battle is already underway after Prime Minister David Cameron responded to his stinging defeat in last week's EU referendum by announcing he would resign. A former defence minister, Liam Fox, said he would announce his bid to succeed Cameron on Thursday, when Boris Johnson, a leader of the victorious "Leave" campaign in the EU referendum, is also expected to confirm his challenge. Johnson's main rival to run the Conservatives and take over as prime minister is likely to be Theresa May, Britain's interior minister, who was on the "Remain" team. An opinion poll, by polling firm YouGov for The Times newspaper, showed May would have the support of 55 percent of Conservative Party members, ahead of 38 percent for Johnson, if the two of them made it to a final shortlist of two candidates. May launched a barely disguised attack on Johnson in a column in the The Times newspaper, portraying herself as representative of ordinary Britons, and more understanding of their lives, than her rival who went to Britain's most elite school Eton. "Frankly, not everybody in Westminster understands what it’s like to live like this. And some need to be told that what the government does isn't a game," she wrote. Work and Pensions Secretary Stephen Crabb has already announced his candidacy. Both of Britain's biggest parties have been left reeling by the EU referendum, creating a political vacuum just as financial markets have been hammered by uncertainty about leaving the bloc and fears grow of economic recession. Many Labour MPs are angry at Corbyn for what they see as his lacklustre performance in the "Remain" campaign. "EXISTENTIAL CRISIS" Labour's deputy leader Tom Watson said the party, which cruised to three back-to-back election victories under former leader Tony Blair between 1997 and 2010, risked an "existential crisis" as Corbyn refused to bow to pressure to resign. Corbyn, a veteran hard-left Labour lawmaker, is unpopular with many Labour MPs, who passed a motion of no confidence in him this week. But he commands strong support among party activists who helped him to take over in 2015, raising the prospect of a continued stalemate within Labour over his leadership. Cameron said on Wednesday it was bad for the country to have a weak opposition party. "For heaven's sake, man, go," he told Corbyn in parliament. Corbyn won control of Labour with the help of trade unions after the party lost a national election last year. In a joint statement on Wednesday, the leaders of 10 big unions said the crisis within Labour at Westminster was "deeply regrettable and unnecessary" but stopped short of saying Corbyn's grip on the party should not be disputed. "His position cannot and should not be challenged except through the proper democratic procedures provided for in the Party’s constitution," the statement said. "We urge all Labour MPs to abide by those procedures, and to respect the authority of the Party’s Leader."
#European Union #britain #Labour party #Conservative Party
You May Also like: