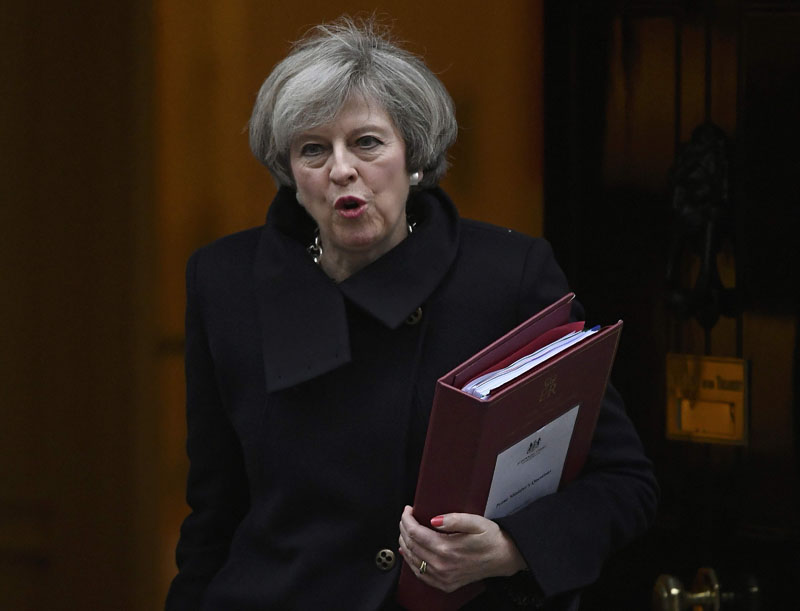 Britain's Prime Minister Theresa May leaves Number 10 Downing Street to attend Prime Minister's Questions at parliament in London, Britain, on February 8, 2017. Photo: Reuters
LONDON: Prime Minister Theresa May won approval from parliament's lower chamber on Wednesday to trigger Britain's exit from the European Union, defeating attempts by pro-EU lawmakers to attach extra conditions to her plan to start divorce talks by March 31. Lawmakers (MPs) voted 494 to 122 in favour of legislation giving May the right to trigger Brexit, ending days of intense debate. The bill now needs the approval of the upper chamber, in which May does not have a majority, before it becomes law. The victory marks a significant step towards starting what is expected to be a complex and difficult two-year negotiation with the EU on issues such as trade, immigration and security that will redraw Britain's role in the world. "We've seen a historic vote tonight," said Brexit minister David Davis. "A big majority for getting on with negotiating our exit from the EU and a strong, new partnership with its member states." After surviving a minor rebellion from within May's Conservative Party that had threatened to undermine her authority and negotiating strategy, the law was passed without amendment and on schedule. That raised expectations that the bill will enjoy an equally smooth passage in the unelected House of Lords, when its journey there begins in earnest on Feb. 20. The government wants to complete the legislative process by March 7. Sources close to discussions in the upper chamber said they expected peers to keep pushing for parliament to have more say during the negotiating process. One source said that could mean a one-week delay to the law's final approval, but neither expected the process to endanger May's end of March deadline. STRAINING UNITY At times rancorous, the debate exposed two major faultlines running through Britain's post-referendum politics: the disconnect between strongly pro-EU Scotland and the rest of the country, and the division over Europe in the opposition Labour Party. An opinion poll indicated on Wednesday that support for Scottish independence had risen since May came out last month in favour of Britain making a clean break when it leaves the EU. Scottish National Party lawmakers repeatedly said in parliament they were being denied a voice in the Brexit process, which was fuelling demand for another independence referendum. "The barracking by government members and the preventing of SNP MPs from speaking in this House play right into our hands and result in headlines saying that support for independence is surging," said SNP lawmaker Joanna Cherry. As the final votes were being counted, SNP lawmakers sang Beethoven's "Ode to Joy" - the EU's anthem - in the debating chamber. The law has also become a conduit for frustrations within the Labour Party, which has split over whether it should support May's vision of Brexit or try to block it to secure a different deal. Labour's support is divided between more prosperous urban constituencies that generally favoured staying in the EU and declining industrial areas that strongly backed Brexit. To complicate things further, many pro-EU Labour lawmakers represent anti-EU areas. Dozens of Labour lawmakers voted against the bill, defying their leader Jeremy Corbyn, who said they should support the law even though their attempts to amend it had failed. Several members of Corbyn's policy team resigned over the issue. "I ... cannot, in all good conscience, vote for something I believe will ultimately harm the city I have the honour to represent, love and call home," said Clive Lewis, Corbyn's business spokesman, who quit moments before the vote.
#European Union #britain #EU lawmakers #Theresa May #Brexit
You May Also like: