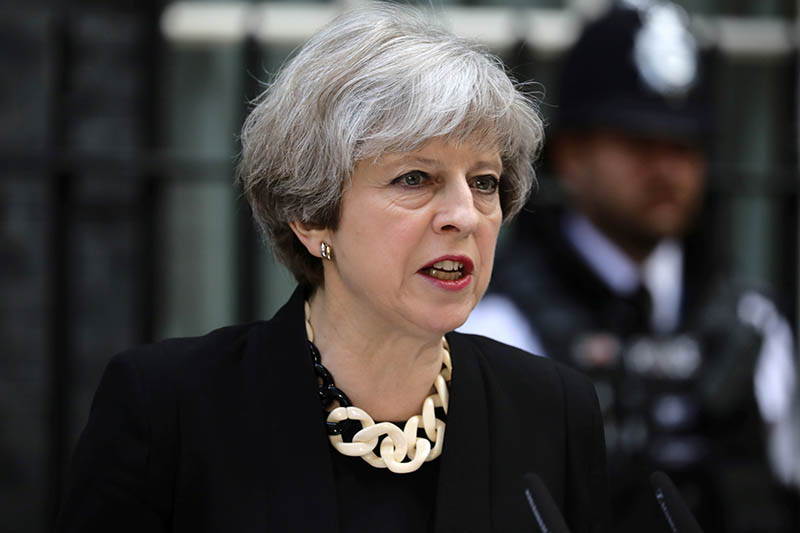 Britain's Prime Minister Theresa May speaks outside 10 Downing Street after an attack on London Bridge and Borough Market left 7 people dead and dozens injured in London, Britain, June 4, 2017. Photo: Reuters
LONDON: Theresa May announced Friday that she will step down as UK Conservative Party leader on June 7, admitting defeat in her attempt to take Britain out of the European Union and sparking a contest to become the country’s next prime minister. She will stay as caretaker prime minister until the new leader is chosen, a process likely to take several weeks. The new Conservative leader would then become prime minister without the need for a general election. Her voice breaking, May said in a televised statement outside 10 Downing St. that she would soon be leaving a job that it has been “the honor of my life to hold.” May became prime minister the month after Britons voted in June 2016 to leave the European Union, and her premiership has been consumed by the attempt to deliver on that verdict. Now she has bowed to relentless pressure from her party to quit over her failure to take Britain out of the EU on the scheduled date of March 29. Britain is currently due to leave the EU on Oct. 31, but Parliament has yet to approve divorce terms. “I feel as certain today as I did three years ago that in a democracy, if you give people a choice you have a duty to implement what they decide,” May said. “I have done my best to do that. ... But it is now clear to me that it is in the best interests of the country for a new prime minister to lead that effort.” Her departure will trigger a party leadership contest in which any Conservative lawmaker can run. The early front-runner is Boris Johnson, a former foreign secretary and strong champion of Brexit. Conservative lawmakers increasingly see May as an obstacle to Britain’s EU exit, although her replacement will face the same issue: a Parliament deeply divided over whether to leave the EU, and how close a relationship to seek with the bloc after it does. Pressure on May reached critical point this week as House of Commons Leader Andrea Leadsom quit and several Cabinet colleagues expressed doubts about her Brexit bill. With her authority draining away by the hour, May on Thursday delayed plans to publish the EU withdrawal bill — her fourth attempt to secure Parliament’s backing for her Brexit blueprint. Leadsom, another likely contender to replace May, joined colleagues in paying tribute to the departing leader. She tweeted that May’s “dignified speech” had been “an illustration of her total commitment to country and duty. She did her utmost, and I wish her all the very best.” Johnson, whose relentless criticism helped push May out of the door, tweeted: “Thank you for your stoical service to our country and the Conservative Party. It is now time to follow her urgings: to come together and deliver Brexit.”
#United Kingdom #House of Commons #Theresa May
You May Also like: