With UN envoy in Damascus, IS takes Syrian town from rebels 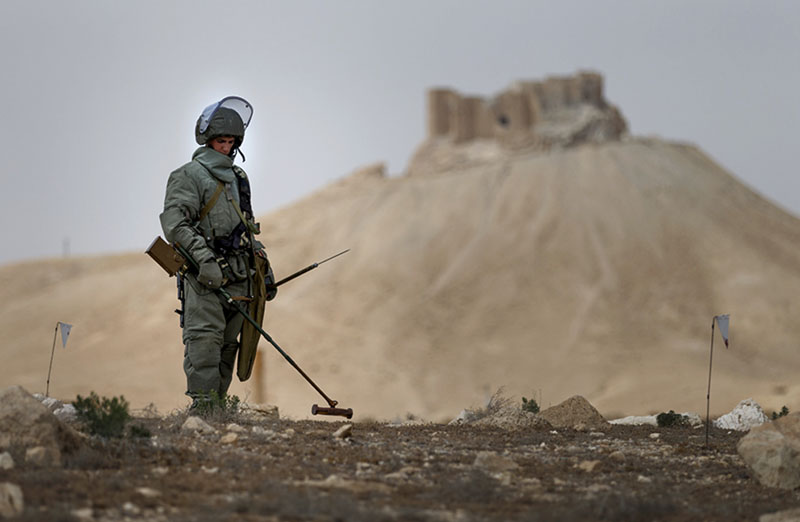 A Russian serviceman checks for mines in Palmyra, Syria, on Friday, April 8, 2016. Photo: Russian Defence Ministry Press Service Photo via AP
DAMASCUS: The UN special envoy on Monday urged Syria's warring sides to preserve the fragile US-Russia-brokered cease-fire ahead of the next round of peace talks in Geneva this week. The plea by Staffan de Mistura, who spoke after meeting Syrian Foreign Minister Walid al-Moallem in Damascus, came as Islamic State fighters retook a northern town along the border with Turkey from Syrian rebels and government forces and rebels clashed across northern and western Syria. Opposition activists also reported clashes and government air raids near the northern city of Aleppo, Syria's largest city and once its commercial hub. The fighting has endangered the US-Russia-engineered truce that has mostly held since the end of February. Al-Qaida's branch in Syria known as the Nusra Front and the Islamic State group are excluded from the cease-fire, which had brought relative calm to much of Syria. De Mistura said the next round of peace talks, due to begin Wednesday in Geneva, will focus on a political transition forSyria, where the civil war, now in its sixth year, has killed 250,000 and displaced half the country's pre-war population of 23 million people. About 4 million have fled the country. In northern Syria, Islamic State fighters took control of the town of al-Rai, just days after losing it to the rebels, according to the Britain-based Syrian Observatory for Human Rights and the Aleppo Today TV station. The Observatory and the TV said IS captured al-Rai early Monday morning after intense fighting. The town is strategically located on the border with Turkey, serving as the Islamic State's access point to supply lines. It also sits along the road to the IS stronghold in Aleppo province. The Observatory's chief Rami Abdurrahman said IS fighters also captured six villages near al-Rai on Monday. IS lost the town last Thursday after an offensive by rebels and militant groups allied with them, including al-Qaida's branch in Syriaknown as the Nusra Front. IS has lost wide areas in Iraq and Syria recently, including the historic central town of Palmyra that was captured by Syrian government forces and their allies recently. The extremists have also suffered leadership setbacks as U.S. drone strikes in Syria have killed several top IS and Nusra Front commanders and key figures in recent weeks. De Mistura said in Damascus that the purpose of his visit was to discuss preparations for the Geneva talks on Wednesday. The next round is "crucially important," de Mistura said, "because we will be focusing in particular on political transition, on governance, and constitutional principles." "We hope and plan to make them constructive ... and concrete," he added. The envoy also said he raised the importance "of protecting and maintaining and supporting the cessation of hostilities," describing it as fragile and stressing that all sides "need to make sure that it continues to be sustained." Al-Moallem said his country is committed to a Syrian dialogue under Syria's leadership and "without preconditions." He said the government delegation to Geneva will be ready on Friday, two days after parliamentary elections are scheduled to be held in Syria. The vote — expected to be a rubber stamp of President Bashar Assad's loyalists — will only proceed in government-controlled areas as the Damascus authorities are unable to organize any balloting in rebel-controlled areas or the territory under the Islamic State group. In the eastern city of Deir el-Zour where IS has laid a siege of several government-held neighborhoods, the World Food Program airdropped food supplies Monday for people "trapped in the besieged" city. WFP has spent weeks trying to recalibrate the complex operation to air-drop food into the city after a previous attempt in February largely failed. U.N. officials have said food on pallets missed targets or was destroyed when parachutes didn't open in an airdrop last month aimed for the city of 200,000 people. Also Monday, opposition activists reported airstrikes on rebel-held areas in Homs province, including Talbiseh and Teir Maaleh.
#Syria #Islamic State group #Al-Qaida #IS militants #Nusra Front #Syrian town #US-Russia-brokered cease-fire #Syrian Foreign Minister Walid al-Moallem
You May Also like: