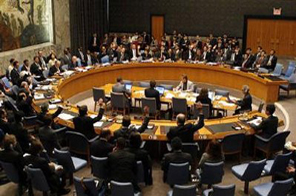 The United Nations Security Council unanimously votes to adopt a resolution that expands financial sanctions and the U.N. trade embargo on North Korea during a meeting of the Council at the U.N. headquarters in New York June 12, 2009. Source: Agencies

In a sign of growing global anger at Pyongyang's pursuit of nuclear weapons in defiance of the council, the North's closest allies Russia and China joined Western powers and nations from every region in unanimously approving the sanctions resolution.

The resolution seeks to deprive North Korea of financing and material for its weapons program and bans the country's lucrative arms exports, especially missiles. It does not ban normal trade, but does call on international financial institutions not to provide the North with grants, aid or loans except for humanitarian, development and denuclearization programs.

He said the resolution demonstrates the international community's "firm opposition" to the atomic blast, "but also sends a positive signal" by showing the council's determination to resolve the issue "peacefully through dialogue and negotiations."

North Korea signaled strong opposition to new sanctions before the vote, but its diplomats were nowhere to be seen on Friday.

That was in stark contrast to the vote in October 2006 when the North Korean ambassador immediately rejected the first sanctions resolution, accused council members of "gangster-like" action, and walked out of the council chamber.

North Korea reiterated Monday in its main newspaper that the country will consider any sanctions a declaration of war and will respond with "due corresponding self-defense measures." On Tuesday, the North said it would use nuclear weapons in a "merciless offensive" if provoked.

The provision most likely to anger the North Koreans calls on countries to inspect all suspect cargo heading to or from North Korea — and to stop ships carrying suspect material if the country whose flag the vessel is flying gives approval.

If the country refuses to give approval, it must direct the vessel "to an appropriate and convenient port for the required inspection by the local authorities."

The resolution does not authorize the use of force. But if a flag country refuses an inspection at sea and refuses to direct the vessel to a port for inspection, a report must be made to the Security Council which could take action against the country, including sanctions.

China's Zhang stressed that "countries have to act prudently in strict accordance with domestic and international laws and under the precondition of reasonable grounds and sufficient evidence."

"Under no circumstances should there be use or threat of the use of force," he said, a view echoed by Russia's U.N. Ambassador Vitaly Churkin.

The resolution is likely to lead to different interpretations on what constitutes "reasonable grounds" for inspecting cargo.

Britain's deputy U.N. ambassador Philip Parham called on all countries to implement the new sanctions, "including the new inspections regione, fully and without delay."

The resolution condemns "in the strongest terms" the North's May 25 nuclear test "in violation and flagrant disregard" of the 2006 sanctions resolution.

It demands a halt to any further nuclear tests or missile launches and reiterates the council's demand that the North abandon all nuclear weapons, return to the Nuclear Nonproliferation Treaty, allow U.N. nuclear inspections, and rejoin six-party talks.

The 2006 resolution imposed an arms embargo on heavy weapons, a ban on material that could be used in missiles or weapons of mass destruction and a ban on luxury goods favored by North Korea's ruling elite. It also ordered an asset freeze and travel ban on companies and individuals involved in the country's nuclear and weapons programs.

The resolution calls on the 192 U.N. member states to implement these measures and asks the council committee monitoring sanctions to designate additional companies and individuals within 30 days that could face an asset freeze and travel ban.

It also expands the arms embargo, banning North Korea from exporting all weapons which would eliminate a significant source of revenue for the country and banning the import of all arms except light weapons.

The resolution also calls on all countries to prevent financial institutions or individuals in their countries from providing financing or resources that could contribute to North Korea's "nuclear-related, ballistic missile-related, or other weapons of mass destruction-related programs or activities."

#UN imposes sanctions on NKorea
You May Also like: