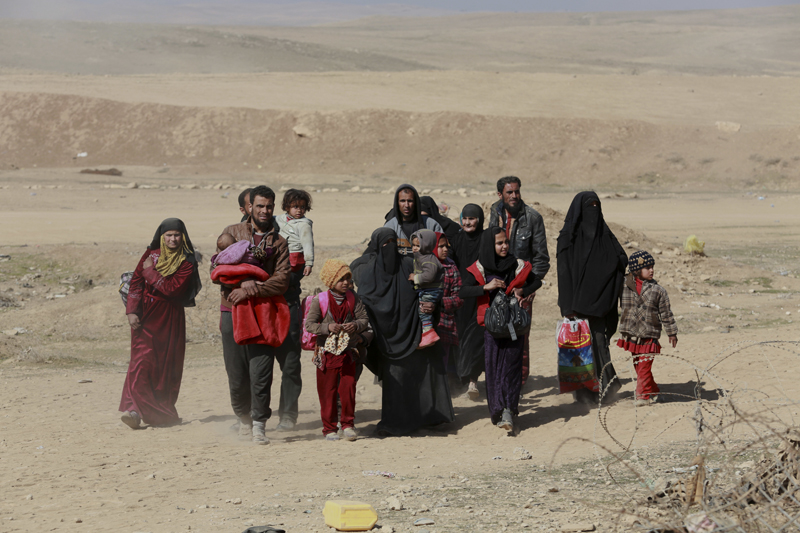 Iraqis flee their homes due to fighting between Iraqi security forces and Islamic State militants, on the western side of Mosul, Iraq, Sunday, Feb. 26. 2017. Photo: AP
BAGHDAD: Since Iraqi government forces launched the push to take the western half of Mosul from the Islamic State group last week, about 8,000 people have fled from that part of the city and surrounding villages, the UN humanitarian aid agency said Tuesday. The agency, known as OCHA, said it is expanding displacement camps to cope with the increasing numbers of those fleeing Mosul. With the support of the US-led coalition, Iraqi forces began the operation to retake western Mosul on Feb. 19, and have so far captured the city's international airport and a sprawling military base next to it as well some neighborhoods from the southern edge. Iraq declared eastern Mosul "fully liberated" in January, after three months of fierce fighting. The people fleeing western Mosul are "often exhausted and dehydrated," the OCHA statement said, adding that an estimated 250,000 people could flee the fighting in the coming days. It also noted "high" trauma casualty rates from western Mosul, with at least 75 civilians treated near the front lines over the past week and warned the situation for the estimated 750,000 civilians remaining in western Mosul "is desperate" as supply lines have been cut off, in particular the highway from Mosul into neighboring Syria. Citing eyewitness accounts, OCHA said civilians still in western Mosul are enduing shortages of everything from food and water to gas, heating oil and medical supplies. The prices of staples such sugar and potatoes have gone up. Associated Press footage from the village of al-Salam southwest of the Mosul airport shows hundreds of civilians trickling to a gathering point in an open and dusty area, carrying a few of their possessions in bags. Security forces separate the men from the women and children before they are taken away in buses and military pickup trucks. Meanwhile, Iraqi special forces moved into western Mosul's Shuhada neighborhood amid fierce clashes with IS militants as federal police units continued clearing up Gawsaq, a neighborhood retaken on Monday from IS, according to special forces and police officers. A mortar round landed in one of the streets, killing three civilians and wounding a fourth, another police officer said, as security forces scrambled to try and evacuate civilians to safe areas. All officials spoke on condition of anonymity as they were not authorized to talk to reporters. The offensive to capture Mosul is the biggest military operation in Iraq since American troops left in 2011. Iraq's second-largest city has been under IS rule for more than two years and remains the Islamic State group's last urban stronghold in Iraq.
#United Nations #Islamic State #Iraq #refugee #Mosul #Middle east crisis
You May Also like: