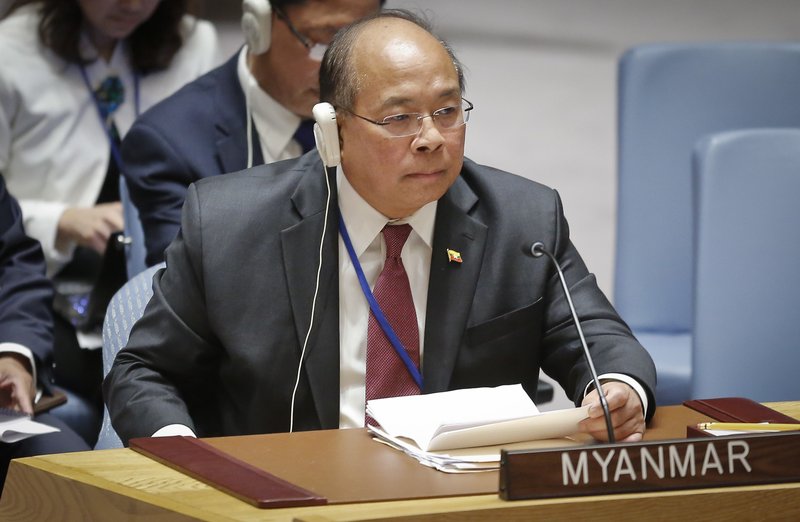 Myanmar Security Advisor U Thaung Tun listens during UN Security Council meeting on Myanmar’s Rohingya crisis, on Thursday September 28, 2017. Photo: AP
UNITED NATIONS: The UN Security Council’s first open meeting on Myanmar in eight years highlighted the body’s deep divisions: China and Russia supported the Southeast Asian country’s government while the US, Britain and France demanded an end to “ethnic cleansing” of its Rohingya Muslim minority. With the number of Rohingyas fleeing to Bangladesh since August 25 now topping 500,000, UN Secretary-General Antonio Guterres urged the UN’s most powerful body on Thursday to take strong action. He also called on Myanmar’s authorities to immediately halt military operations, allow “unfettered access” for humanitarian aid, and ensure that all those who fled can return home. US Ambassador Nikki Haley, using Myanmar’s former name of Burma, told council members: “We cannot be afraid to call the actions of the Burmese authorities what they appear to be: a brutal, sustained campaign to cleanse the country of an ethnic minority.” “The time for well-meaning, diplomatic words in this council has passed,” she said. “We must now consider action against Burmese security forces who are implicated in abuses and stoking hatred among their fellow citizens.” Haley urged all countries to suspend the supply of weapons to the country’s military until its members are held accountable for the “brutal assault” on the Rohingyas. The US, Britain and France were joined by many council members in demanding an immediate end to the violence and a strong council response. A global coalition of 88 civil society and human rights organizations urged the Security Council to step up pressure on Myanmar’s authorities “by seriously considering options such as an arms embargo against the military and targeted financial sanctions against individuals responsible or crimes and serious abuses.” But the prospect of a strong response from the council appeared unlikely after both China and Russia supported the government’s approach to tackling the crisis. China’s deputy UN ambassador, whose country has close ties to Myanmar, urged the international community “to view the difficulties and challenges confronting the government of Myanmar through objective optics, exercise patience, and provide support and help.” Wu Haitao stressed that “many of the differences and antagonisms” in Rakhine state have been building up over a long time and “there is no quick fix.” “As we speak, the situation on the ground is beginning to move toward stability,” Wu said. “All parties should work constructively to help reinforce this momentum, de-escalate the situation and alleviate the humanitarian conditions step-by-step.” Russia’s UN Ambassador Vassily Nebenzia warned that “excessive pressure” on Myanmar’s government “could only aggravate the situation in the country and around it.” There is no alternative to resolving “the longstanding and complicated crisis” in Rakhine through political means and a dialogue among representatives of all nationalities and faiths,” he said. “We need to stop any kind of violence from any side and the rhetoric which fuels it.” The Russian ambassador and the UN secretary-general both warned that the Rohingya crisis could spread. Guterres said “the failure to address this systematic violence could result in a spillover into central Rakhine, where an additional 250,000 Muslims could potentially face displacement.” He also warned that the humanitarian crisis is a breeding ground for radicalization, criminals and traffickers. And he said the broader crisis “has generated multiple implications for neighboring states and the larger region, including the risk of inter-communal strife.” Nebenzia said “terrorists and extremists ... are already trying to put down roots in Southeast Asia” and “we cannot allow further radicalization in the region.” The council meeting also exposed tensions between Myanmar and Bangladesh. Myanmar’s national security adviser blamed the crisis in Rakhine state on terrorism and declared that “there is no ethnic cleansing and no genocide in Myanmar.” U Thaung Tun said security operations ended Sept. 5 and the vast majority of those who fled to Bangladesh did so because “fear was instilled in the heart by the terrorists.” More than 50 percent of villages in Rakhine state are intact and people are living in peace with their neighbors, he said. He announced that diplomats, accompanied by the media, will be visiting northern Rakhine on Monday. And he said Guterres has been invited to visit Myanmar. “It is imperative that the international community join hands with us to ensure that democracy takes firm root,” U Thaung Tun said. “The Security Council must refrain from taking measures that exacerbate rather than alleviate the situation in Rakhine state. It can and must do no less.” But Bangladesh’s UN Ambassador Masud Bin Momen told the council the violence in Rakhine hasn’t stopped despite government claims. He said Rohingyas described rape being used as a weapon to scare families to leave, and reported villages being burned, and people being looted and abused. “These atrocities attest that the Myanmar government is using arson to de-populate northern Rakhine and take over ownership of lands,” he said. Bin Momen said the Security Council should also take into account that reportedly more than two divisions of Myanmar’s armed forces were deployed near the Bangladesh border in the first week of August with heavy armaments and artillery. With the arrival of over 500,000 Rohingyas since Aug. 25, he said Bangladesh is now hosting over 900,000 members of “this most persecuted minority in the world.” Bin Momen called this situation untenable and reiterated an appeal to the U.N. to create “safe zones” inside Myanmar. The Security Council over the years has discussed Myanmar behind closed doors, including three recent closed meetings. The last open meeting in 2009 was attended by then-Secretary-General Ban Ki-moon.
#United Nations #myanmar #UN Security Council #Rohingya Muslim
You May Also like: