US-backed Syria force says IS territorial defeat is near

BAGHOUZ, SYRIA: The sound of mortar shelling and fighter jets whizzing by filled the air.

At the base in this small village, fighters from the US-backed Syrian Democratic Forces coordinate with their comrades about two kilometres (1.2 miles) away who are closing in on Islamic State militants hiding in their last toehold on the border between Syria and Iraq.

Despite the projectiles being fired, the mood among the fighters at this base is easy-going. The Kurdish-led force, with help from the US-led coalition, has all but defeated the most ferocious extremist group to terrorize the region in years.

“The situation is great. It can’t be better,” said one commander at the front line into his walkie-talkie.

Clashes continue inside the village of Baghouz, mostly at night. Fighters say IS militants are hiding among civilians in a displaced people’s camp to avoid airstrikes. Artillery rounds were meant to clear landmines for the SDF fighters to advance.

But SDF commanders insist the official end of the group’s hold on territory in Syria is near.

“We will very soon bring good news to the whole world,” said Ciya Furat, a commander with the Kurdish-led SDF, speaking at a news conference, miles away at the al-Omar Oil Field Base in the Deir el-Zour province. 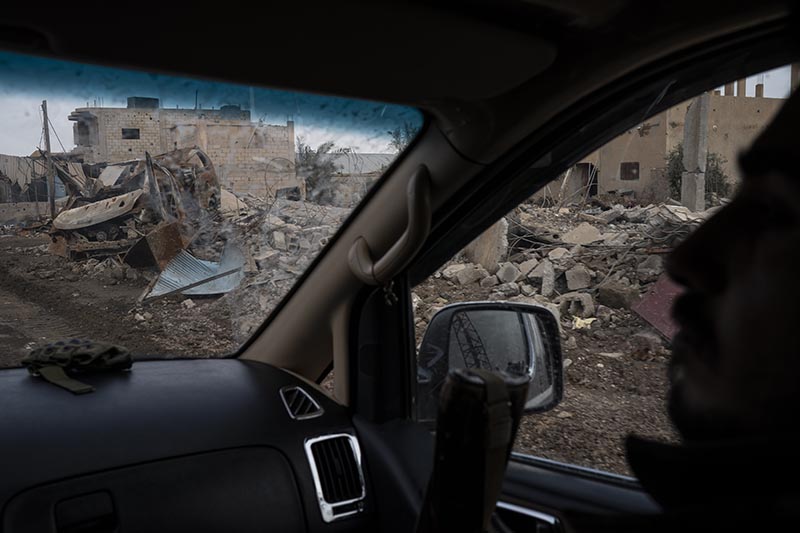 “We are dealing with this small pocket with patience and caution. It is militarily fallen but civilians are used as human shields,” SDF spokesman Mustafa Bali told the AP. Bali added that the SDF believes that IS gunmen are also holding previously kidnapped Syrians in the area.

SDF fighters said that as they cleared areas captured from IS they found some captives held in bathrooms four days earlier, including two soldiers from the Syrian government. They added that they have also removed and buried bodies of foreign fighters.

“We found bodies of Moroccans, Chinese and Chechnyans. Bodies of foreigners,” said SDF fighter Hamza as he communicated with his comrades on his walkie-talkie.

Hamza said IS snipers still target their forces from among the civilians and described the abundance of land mines as a major challenge. He also had a message for the US president.

“We tell Trump, it wasn’t you that liberated it. It was us here on the ground,” he added.

Rami Abdurrahman, who heads the Britain-based Syrian Observatory for Human Rights, a war monitor, said SDF fighters are almost in full control of the area once controlled by extremists, adding that there might still be IS fighters hiding in a network of underground tunnels.

The Observatory said that some 200 IS gunmen surrendered Friday, days after about 240 others surrendered and were taken by SDF fighters and members of the US-led coalition.

Furat said that after the physical defeat of IS, the SDF “will continue in its fight against Daesh sleepers cells.”

Despite the expected defeat on the ground, activists and residents say IS still has sleeper cells in Syria and Iraq and is laying the groundwork for an insurgency. The group has claimed responsibility in recent months for deadly attacks, mostly in Iraq, more than a year after the Iraqi government said the extremists have been defeated after losing the northern city of Mosul in 2017, the largest they held.

Hamza, the fighter, said his forces have borne the brunt of the fighting in the ground offensive against the militants. Despite being on the brink of territorial defeat, the group remains a danger, he said.

“We can finish Daesh off in two days,” Hamza said, using the Arabic acronym for IS. “But we need months or years to liberate the minds.”