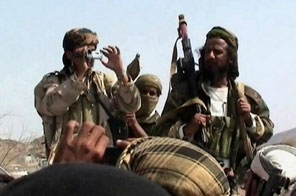 Men claiming to be Al-Qaeda members arrive to address a crowd in Yemen's southern province of Abyan. The United States and Britain stepped up the fight against an emerging Source: AFP

HONOLULU: The United States and Britain stepped up the fight against an emerging "terrorist threat" in Yemen, as President Barack Obama for the first time blamed Al-Qaeda for attacking a US airliner.

Obama, on vacation in Hawaii, promised to hold the affiliate, Al-Qaeda in the Arabian Peninsula (AQAP), to account and said US probes were revealing new evidence about the suspected bomber Umar Farouk Abdulmutallab.

"We know that he traveled to Yemen," Obama said in his weekly video address.

"It appears that he joined an affiliate of Al-Qaeda, and that this group, Al-Qaeda in the Arabian Peninsula, trained him, equipped him with those explosives and directed him to attack that plane headed for America."

It was the first time that Obama had blamed the Al-Qaeda cell for the attack, though AQAP had previously claimed the thwarted bombing and US officials spoke of a "linkage" to the group.

Adulmutallab is accused of trying to destroy a Northwest jet carrying 290 people as it approached Detroit by setting off explosives stitched into his underwear. The bid failed when he was stopped by passengers.

Brown's office said Obama and the British leader had agreed "US-UK funding for a special counter-terrorism police unit in Yemen."

"Downing Street and the White House have agreed to intensify joint US-UK work to tackle the emerging terrorist threat from both Yemen and Somalia in the wake of the failed Detroit terror plot," a British statement said.

On Friday, Britain called an international meeting on combating extremism in Yemen for London January 28, in parallel with a conference on Afghanistan drawing senior ministers or leaders from over 40 nations.

Yemen praised the talks a "step in the right direction that will mobilize international support for Yemeni development and its efforts to battle unemployment and the effects of poverty."

Obama aides gave few details of the talks, which coincided with reports of American involvement in strikes against extremists there.

"General Petraeus was in Yemen today as part of our ongoing consultations with and efforts in support of Yemen," a senior Obama administration official said on condition of anonymity. Related article: Yemen steps up Qaeda flight

Obama was briefed on the talks by his top anti-terror official John Brennan.

Saba said Petraeus praised Saleh "for the success of the operations" against Al-Qaeda, and reaffirmed Washington's support for Yemen in its efforts to fight terrorism.

CBS News, citing a US special operations expert Sebastian Gorka, meanwhile reported that recent strikes on Al-Qaeda positions in Yemen, including cruise missile attacks, were led by the United States.

Obama was expected back in Washington Monday, on the eve of a key meeting on the attack with chiefs of US spy agencies and government departments with national security responsibilities.

Michael Leiter, director of the US National Counterterrorism Center, warned Saturday the Christmas Day attack would not be the last.

"While this attempt ended in failure we know with absolute certainty that Al-Qaeda and those who support its ideology continue to refine their methods to test our defenses and pursue an attack on the Homeland," he said.

The NCTC was set up after the September 11 attacks in 2001 exposed a disastrous lack of intelligence-sharing among US spy services, but has been one of a number of agencies criticized over the Northwest Airlines attack.

Obama last week angrily denounced "systemic" failures in the US intelligence and homeland security operation, and vowed to put them right.

The wider threat from Islamic militancy was also underscored Saturday after Danish police charged a man linked to Somali Islamists with the attempted murder of a cartoonist notorious for his drawing of the prophet Mohammed. Related article: Attack on Danish cartoonist

The 28-year-old Somali national has broken into cartoonist Kurt Westergaard wielding an axe and was shot and wounded by police.

#US #Britain widen anti-terror front
You May Also like: