US-Cuba deal to restore ties to be unveiled on Wednesday 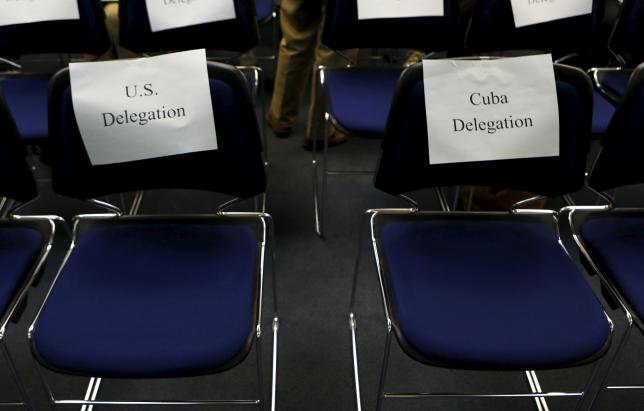 Chairs are prepared before a news conference in Washington, after the fourth round of U.S.-Cuba talks to re-establish diplomatic relations and re-open embassies, May 22, 2015. REUTERS

WASHINGTON/HAVANA: The United States and Cuba have reached an agreement to reopen embassies and restore diplomatic ties severed more than five decades ago, and the historic deal will be unveiled on Wednesday, US officials said on Tuesday.

Signalling it is likely to act in sync with the United States, Cuba's Communist government said the chief of the US mission, Jeffrey DeLaurentis, would meet the interim foreign minister in Havana on Wednesday to deliver a note from Obama to Castro on the re-establishment of ties between the two former Cold War rivals.

Obama and Castro met in Panama in April.

Both countries can now upgrade their so-called interests sections in Havana and Washington into full-blown embassies, with ambassadors to be appointed later. The State Department must give Congress a 15-day notice before opening an embassy.

"We will formally announce tomorrow that the United States and Cuba have reached an agreement to re-establish formal diplomatic relations and open embassies in each other’s capitals," a senior US official said.

Restoration of ties would be the latest phase in a normalization process that is expected to move slowly because of lingering problems over issues such as Cuba's human rights record, as well as Havana's desire to keep a tight rein on Cuba's society and its state-run economy.

A US economic embargo against Cuba will remain in place, and only Congress can lift it.

US officials say there is little, if any, chance that hardline anti-Castro lawmakers in Congress would be able to block the restoration of ties or reopening of embassies.

But Ileana Ros-Lehtinen, a Republican Cuban-American congresswoman from south Florida, said in a statement: "Opening the American Embassy in Cuba will do nothing to help the Cuban people and is just another trivial attempt for President Obama to go legacy shopping.”

The United States and Cuba began secret negotiations on restoring ties in mid-2013, leading to the landmark announcement on Dec. 17, 2014, when Obama and Castro said separately that they had swapped prisoners and would seek to normalise relations.

That led to a series of meetings in Havana and Washington about restoring ties.

Cuba was formally removed from the US list of state sponsors of terrorism in late May, a critical step toward rapprochement 54 years after Washington cut off relations at the height of the Cold War and imposed the embargo.

Obstacles to normalization have included US demands for relative freedom of movement for their diplomats on the island, comparable to that in China, Russia and Vietnam, while the Cubans had objected to US training courses in journalism and information technology given at the US interests section in Havana.

There were no immediate details on other outstanding differences between the countries, but Wednesday's announcement was a clear sign that major stumbling blocks had been removed.

Sources familiar with the matter said US Secretary of State John Kerry was likely to travel to Havana during the week of July 20 for a flag-raising ceremony to reopen the American embassy.

It was unclear how fast the two sides will act in naming ambassadors, but those Republicans who oppose US-Cuban detente would be widely expected to try to block Senate confirmation of Obama's choice for envoy.

A full-service US mission in Havana could offer some reassurance to US companies interested in investing in Cuba and also help ease the way for more - though still heavily restricted - travel to the island by American citizens.

Obama, a Democrat, has asked the Republican-controlled Congress to lift the embargo, but the conservative leadership in Congress has resisted calls to remove what had been a pillar of US foreign policy under nine presidents.

Congress is also considering an end to the US travel ban. Obama has eased restrictions for Americans to conduct authorized travel to Cuba, but tourism remains illegal.

#United States #Cuba #diplomatic ties
You May Also like: