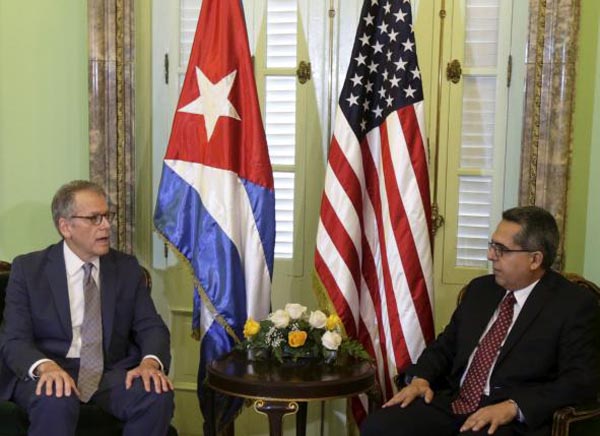 Chief of Mission at the US Interests Section in Havana Jeffrey DeLaurentis (L) talks to Cuba's interim Foreign Minister Marcelino Medina in Havana July 1, 2015.
Photo: Reuters/Enrique de la Osa
WASHINGTON: President Barack Obama announced today that the United States and Cuba will re-establish full diplomatic relations, severed 54 years ago in the angry heat of the Cold War. The US president and Cuban state television simultaneously announced the landmark agreement, aimed at easing decades of enmity across the narrow Straits of Florida. Under the deal, embassies in Washington and Havana will be reopened as soon as July 20, in what Obama described as a "historic step forward," and a "new chapter" in US relations with Latin America. "Later this summer, Secretary John Kerry will travel to Havana formally to proudly raise the American flag over our embassy once more," Obama said in the White House Rose Garden. Meanwhile, Cuban President Raul Castro expressed his desire to "develop respectful and cooperative relations between our two peoples and governments," in a letter to his US counterpart read by state media. The head of the US interests section in Havana, Jeffrey DeLaurentis — tipped by some to become the ambassador — handed to Cuban diplomats a similar letter from Obama to Castro. President Dwight Eisenhower shuttered the US embassy in the Cuban capital on January 3, 1961 after Fidel Castro came to power and quickly forged ties with the Soviet Union. The closure foreshadowed epoch-making conflagrations at the Bay of Pigs and over Russian nuclear missiles sites in Cuba. Obama has argued the decades-old policy of isolating the Communist-run island has failed and is a relic of a long-gone era. He rejected "clinging to a policy that was not working" and called on the Republican-controlled Congress to end a throttling US trade embargo set up in 1962. "It's long past time for us to realise that this approach doesn't work. It hasn't worked for 50 years. It shuts America out of Cuba's future and it only makes life worse for the Cuban people." Polls show a majority of Americans support Obama's efforts to improve ties. But powerful Cuban-Americans oppose restoring ties with Havana's government and could yet pose problems for further rapprochement. Republican presidential candidates who have ties to Cuba, including Marco Rubio and Ted Cruz, have been outspoken in their opposition to the thaw. Rubio, a senator from Florida, accused Obama of giving concessions as Cuba continued to stifle democracy. "It is time for our unilateral concessions to this odious regime to end," he said. "I intend to oppose the confirmation of an ambassador to Cuba until these issues are addressed." In Vienna, Kerry acknowledged the "sharp differences" between the two sides on democracy and human rights, but also highlighted areas of cooperation such as transportation and environmental protection. After 18 months of secret talks between Havana and Washington — and aided by the Vatican — the two countries agreed in December to begin warming relations. The pair held a historic meeting in Panama in April, the first sit-down between leaders of the US and Cuba since 1956.
#United States #US President Barack Obama #US and Cuba relation #Diplomatic relation
You May Also like: