US intended to allow passage of UN draft critical of Israel: officials 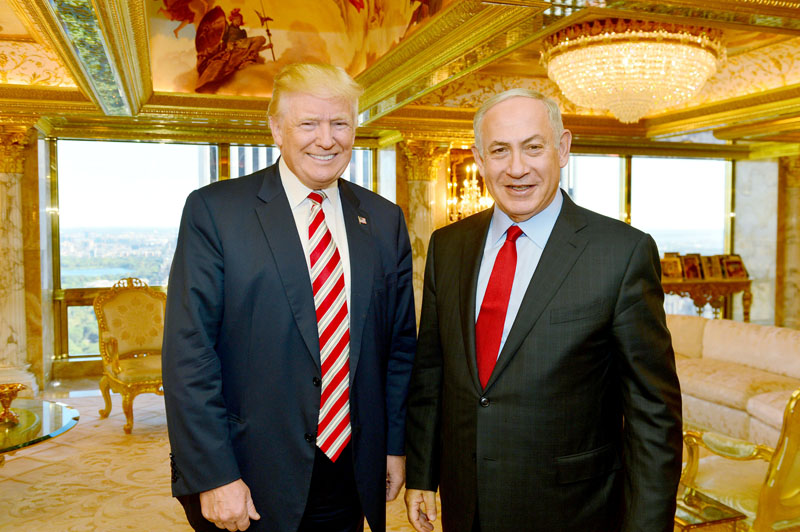 File - Israeli Prime Minister Benjamin Netanyahu (right) stands next to Republican US presidential candidate Donald Trump during their meeting in New York, on September 25, 2016. Photo: Reuters
UNITED NATIONS/WASHINGTON: The United States intended to allow the UN Security Council to approve a resolution demanding an end to Israeli settlement building, two Western officials said on Thursday, a major reversal of US practice, which prompted Israel to ask President-elect Donald Trump to apply pressure. In a day of intense diplomatic wrangling on one of the thorniest Middle East conflicts, Egypt, which had proposed the draft resolution, abruptly put off a vote that had been scheduled for Thursday afternoon. Diplomats said Cairo had acted under pressure from Israel and to avoid alienating Trump, who spoke to the Egyptian president and urged the White House to use its veto. By late Thursday, four Security Council members had given Egypt an ultimatum and threatened to put the draft resolution to a vote. The two Western officials said President Barack Obama had intended to abstain from the vote, a relatively rare step by the United States to register criticism of the building on occupied land that Palestinians want for a state. The government of Israeli Prime Minister Benjamin Netanyahu, who has had an acrimonious relationship with Obama, believes the Obama administration had long planned the council vote in coordination with the Palestinians, the senior Israeli official said. "It was a violation of a core commitment to protect Israel at the UN," the official said. The White House had no immediate comment. US officials have voiced growing fears that a "two-state" solution is imperiled by Israeli settlement building and have been more willing to voice open criticism, including, the two Western officials said, via Thursday's planned vote. A US abstention would have been seen as a parting shot by Obama, who has made the settlements a major target of his - ultimately futile - peace efforts. President Abdel Fattah al-Sisi of Egypt, which in 1979 became the first Arab nation to make peace with Israel, called Trump on Thursday, a Trump transition official said, saying they spoke broadly about laying the ground for Middle East peace. Sisi's office said the two leaders spoke. "The presidents agreed on the importance of affording the new US administration the full chance to deal with all dimensions of the Palestinian case with a view of achieving a full and final settlement," presidency spokesman Alaa Yousef said. The resolution would demand Israel "immediately and completely cease all settlement activities in the occupied Palestinian territory, including East Jerusalem" and said the establishment of settlements by Israel has "no legal validity and constitutes a flagrant violation under international law." Egypt, currently a Security Council member, worked with the Palestinians to draft the text. The senior Israeli official said Israel remained concerned the resolution could still go ahead with another sponsoring country. New Zealand, Venezuela, Malaysia and Senegal asked Egypt to clarify by midnight whether it planned to call a vote. "In the event that Egypt decides that it cannot proceed to call for vote on 23 December or does not provide a response by the deadline, those delegations reserve the right to table the draft ... and proceed to put it to vote ASAP," the four states wrote in a note, seen by Reuters. They said "the proposal for other delegations to take the lead ... would also help Egypt by relieving it of the burden of carrying this draft alone." They plan to meet on Friday morning to decide how to proceed, diplomats said. CONSTRUCTIVE RELATIONS WITH TRUMP? Officials in Netanyahu's office spoke to Egyptian officials on Thursday about postponing the vote, an Israeli diplomat said. It was not clear what pressure Israel may have put on Egypt but there are several ways it could do so, including curtailing Israeli security cooperation in Egypt's fight against Islamist militants in the Sinai desert. Netanyahu took to Twitter in the dead of night in Israel to make the appeal for a veto. Hours later, Trump backed fellow conservative Netanyahu on one of the most contentious issues in the Israeli-Palestinian conflict and the pursuit, effectively stalled since 2014, of a two-state solution. The State Department declined to comment immediately on reports of the planned abstention. Israel's far-right and settler leaders have been buoyed by the election of Trump, who has signaled a possible change in US policy by tapping a fundraiser for a major Israeli settlement as Washington's ambassador to Israel. Netanyahu, for whom settlers are a key constituency, has said his government has been their greatest ally since the capture of the West Bank and East Jerusalem in a 1967 war. The United States says continued Israeli settlement building lacks legitimacy, but has stopped short of adopting the position of many countries that it is illegal under international law. Some 570,000 Israelis live in the West Bank and East Jerusalem. A resolution needs nine votes in favor and no vetoes by the United States, France, Russia, Britain or China to be adopted. The United States has vetoed dozens of Security Council resolutions on Israel and it is rare for it to abstain. The last time the Security Council adopted a resolution on Israel and the Palestinians was in January 2009, when Washington abstained on a resolution calling for ceasefire and withdrawal of Israeli forces from Gaza. In 1979 the United States abstained on a resolution, when the council said Israeli settlements “have no legal validity and constitute a serious obstruction to achieving a comprehensive, just and lasting peace in the Middle East.” Britain also abstained.
#United States #UN Security Council #Donald Trump #Israel #US-Israel relations
You May Also like: