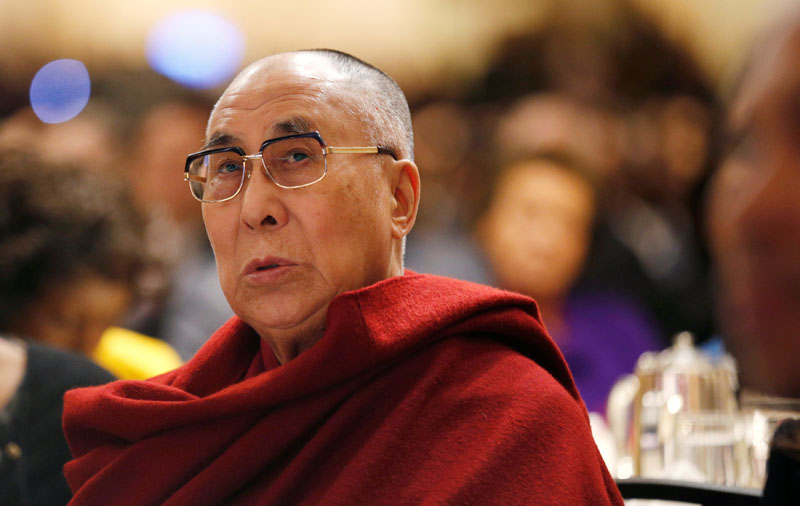 File - The Dalai Lama looks up toward the head table, where US President Barack Obama was seated, during the National Prayer Breakfast in Washington, on February 5, 2015. Photo: Reuters
DHARAMSALA:  A US Congressional delegation visited the Dalai Lama at his headquarters in India on Tuesday, seeking to draw world attention to human rights in Tibet as President Donald Trump eyes warmer ties with China. House Democratic Leader Nancy Pelosi flew with a bipartisan delegation to the Himalayan hill town where the 81-year-old Buddhist leader is based, on a trip likely to rile Beijing which regards him as a dangerous splittist. "As we visit His Holiness the Dalai Lama, our bipartisan delegation comes in his spirit of faith and peace. We come on this visit to be inspired by His Holiness and demonstrate our commitment to the Tibetan people, to their faith, their culture and their language," Pelosi said. The lawmakers' visit comes at a delicate time for Trump. Campaigning for election, Trump had cast China as a trade adversary and currency manipulator, but he now seeks President Xi Jinping's support to restrain nuclear-armed North Korea. After Trump's election last November, the Dalai Lama said he was keen to meet the incoming US leader. It now looks unlikely the Nobel peace laureate will get a White House invite - an honor accorded by recent American presidents - anytime soon. Secretary of State Rex Tillerson last week played down the role of human rights in US foreign policy, raising fears the Dalai Lama, who fled to India from Tibet in 1959, could lose one of his last friends in the West. LAST VISIT Pelosi last visited the Dalai Lama in 2008, in the aftermath of a Chinese crackdown on an uprising in Tibet that coincided with the Beijing Olympics. Since then, say experts and human rights activists, the situation in the Tibet Autonomous Region has worsened as authorities crack down on dissent and pursue systematic policies to assimilate Tibetans. "The level of repression in Tibet has increased tremendously," said Meenakshi Ganguly, South Asia director at Human Rights Watch. Numbers crossing from Tibet into India and neighboring Nepal have slowed to a trickle, she added, sapping the vitality of the Tibetan emigre community in South Asia. Reports continue to emerge from Tibet from time to time of isolated acts of protest against Chinese rule. A 16-year-old student, chanting "Tibet wants freedom" and "Let His Holiness the Dalai Lama come back to Tibet", burned himself to death on May 2, Radio Free Asia's Tibetan service has reported. Representative Jim McGovern, a Democrat traveling with Pelosi, has called for a new US policy towards Tibet to safeguard the identity of the Tibetan people and hold China accountable for human rights abuses. APPLYING PRESSURE China has piled pressure on foreign governments to give the Dalai Lama the cold shoulder as it seeks to consolidate its hold on Tibet, over which Beijing took control in 1950 in what it calls a "peaceful liberation". Most recently, Beijing denounced New Delhi for hosting the Dalai Lama when he traveled to India's northeastern state of Arunachal Pradesh - territory it claims as Southern Tibet - to give spiritual teachings to his followers. That trip sparked speculation that the Dalai Lama wanted to consult with elders on his succession. Tibetan Buddhism holds that the soul of a senior lama, or priest, is reincarnated in the body of a child after he dies. China says the tradition must continue and its officially atheist Communist leaders have the right to approve the Dalai Lama's successor, as a legacy inherited from China's emperors. The Dalai Lama has suggested the title could end with him, when he dies. China accuses him of betraying, and being disrespectful towards, the Tibetan religion, by saying there might be no future reincarnations.
#Human rights #Dalai Lama #Tibet #US lawmakers #Nancy Pelosi #US lawmakers-Dalai Lama meeting
You May Also like: