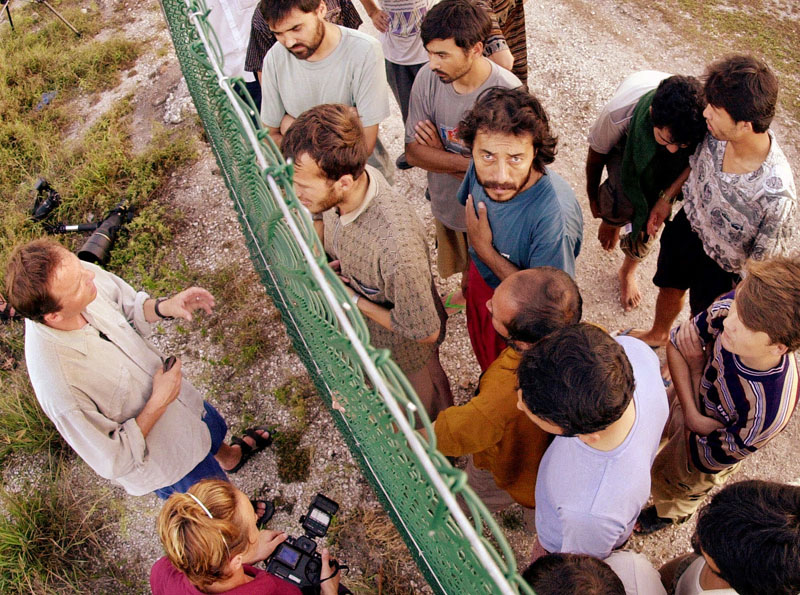 File - Refugees (right) gather on one side of a fence to talk with international journalists about their journey that brought them to the Island of Nauru, on September 19, 2001. Photo: AP
CANBERRA:  US officials stopped screening refugees for potential resettlement in the United States this week but will return to the Pacific atoll of Nauru to continue working toward a deal that President Donald Trump has condemned as "dumb," an Australian minister said Thursday. Immigration Minister Peter Dutton would not say when US Department of Homeland Security officials would return to Nauru to conduct what Trump describes as "extreme vetting." Trump made enhanced screening a condition for agreeing to honor an Obama administration deal to accept up to 1,250 refugees refused entry into Australia. Australia pays Nauru and Papua New Guinea to keep more than 2,000 asylum seekers — mostly from Iran, Afghanistan and Sri Lanka — in conditions condemned by rights groups. The process of "extreme vetting" has yet to be explained. US officials were sent to Nauru within days of the deal's announcement in November after the US presidential election. But they left this week with arrangements under a cloud. "I don't have any comment to make in relation to when US officials will be on Nauru next," Dutton told reporters. "There have been officials there who have left ... in the last couple of days and we would expect other officials to be there in due course." Refugee Action Coalition spokesman Ian Rintoul said most of refugees on Nauru who had been accepted by the United States as candidates for resettlement had initial interviews with US officials in what they had been told was a two-step process. But there have been no second interviews so far, Rintoul said. Australia has determined that there are 1,600 genuine refugees among 2,077 asylum seekers on Papua New Guinea and Nauru. There could also be refugees among the 370 asylum seekers who came to Australia for medical treatment then took court action to prevent their return to the island camps. As of last week, Nauru held 1,132 asylum seekers including women and children. The Manus facility in Papua New Guinea housed 818 men with another 127 male asylum seekers living elsewhere in Papua New Guinea. Australia has said the "most vulnerable" refugees on Nauru would be given priority for US resettlement. After committing to Prime Minister Malcolm Turnbull that he would honor the agreement, Trump tweeted that it was a "dumb deal." Asked last week whether the deal would continue, Trump said: "We'll see what happens." Papua New Guinea was on Thursday accused of breaching the rights of 60 asylum seekers who have been told they are about to be deported. The 60 have had their refugee claims rejected and one has already been removed from the men-only Manus facility, said Ben Lomai, a lawyer representing them. Most of those targeted for deportation were from Iran, with others from Syria, Somalia, Sudan and Bangladesh. One asylum seeker from Nepal was put on a commercial flight Wednesday night and told he was being returned to his home country, Lomai said. Lomai was preparing an application for the court in Papua New Guinea on Thursday asking that the deportations be halted. The asylum seekers already have separate court applications pending asking that they be resettled in Australia, and Lomai said it would be unjust to deport them before those matters were heard. Australian Attorney-General George Brandis defended Papua New Guinea's legal right to deport the men, saying their refugee claims have been investigated and rejected. The Papua New Guinea government did not immediately respond to a request for comment.
#Nauru #Donald Trump #US immigration #US officials #Trump #US travel ban #US executive order #Trump's travel ban #Nauru refugees #Nauru refugees resettlement #Peter Dutton #Nepal asylum seeker
You May Also like: