US vows to get tough on Karzai 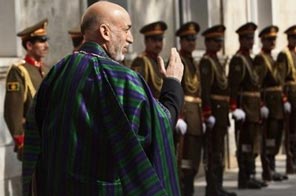 Afghan President Hamid Karzai and an honour guard greet United Nations Secretary General Ban Ki-moon at the Presidential Palace in Kabul on November 2. US President Barack Obama signaled a tough new approach to Karzai urging him just hours after his re-election to wipe out corruption amid warnings of hard talks ahead. Source: AFP

WASHINGTON: US President Barack Obama has signaled a tough new approach to Afghan leader Hamid Karzai, urging him just hours after his re-election to wipe out corruption amid warnings of hard talks ahead.

"This has to be point in time in which we begin to write a new chapter based on improved governance," Obama said he had told Karzai in a telephone call, just after the Afghan leader was declared the winner of the fraud-tainted poll.

Obama congratulated Karzai, but told him to make "a much more serious effort to eradicate corruption.

"He assured me that he understood the importance of this moment. But as I indicated to him, the proof is not going to be in words. It's going to be in deeds," Obama warned.

Karzai, installed as the Afghan leader after the US forces ousted Taliban Islamic militants in 2001, was Monday declared the winner of presidential elections in August that were marred by widespread fraud and ballot-stuffing. Reactions: World powers stick by Karzai, US says fight corruption

"Although the process was messy, I'm pleased to say that the final outcome was determined in accordance with Afghan law, which I think is very important not only for the international community that has so much invested in Afghan success, but most importantly is important for the Afghan people," Obama said.

The US leader added that "after some difficult years in which there's been some drift" he expected to see Karzai demonstrate that "he's going to move boldly and forcefully forward and take advantage of the international community's interest in his country to initiate reforms internally."

"That has to be one of our highest priorities," said Obama, whose administration has put increasing pressure on the Afghan leader and made no secret of its concerns about corruption in Afghanistan.

The announcement that Karzai would receive a second five-year term, cancelled a run-off that had threatened to descend into farce and further destabilize Afghanistan.

It followed intense diplomatic pressure and sought to draw a line under two months of political chaos in a war-torn nation where 100,000 NATO and US troops are battling an increasingly virulent Taliban resurgence.

Obama, who is mulling a wide-ranging review of US policy in Afghanistan, said he also wanted to see "joint efforts to accelerate the training of Afghan security forces so that the Afghan people can provide for their own security."

But he gave no indication on when his keenly-awaited announcement on whether to deploy more troops to the conflict would come.

General Stanley McChrystal, the top US and NATO commander in Afghanistan, has called for an extra 40,000 US troops to fight an increasingly deadly insurgency by the Taliban and Al-Qaeda linked forces.

But the conflict, which has claimed the lives of more than 400 coalition troops this year, is growing increasingly unpopular among the American public as it drags into its ninth year. Related article: Cash-strapped US media struggles to cover war

Gibbs said talks had to begin on "governance, civil society, and corruption... to ensure that we have a credible partner in our efforts to help secure the country."

He said any decision by Obama on whether to commit more troops to the conflict would "be made in the coming weeks."

"The president is working with the national security team to evaluate... how best to formulate a strategy that supports the goal of disrupting, dismantling, and ultimately destroying Al-Qaeda," Gibbs said.

Now that Karzai had been declared the winner of the August elections, there is "no question it illuminates the situation going forward," he said.

But Gibbs stressed it was not the "single" question that had to be resolved.

US officials recently said it would be irresponsible to deploy more troops -- with the US military already stretched from fighting in Iraq -- before the election crisis was resolved.

But Karzai's only challenger, former foreign minister Abdullah Abdullah, quit the second round contest on Sunday charging there were no safeguards to prevent a repeat of the massive fraud that threw out nearly a quarter of votes cast in August.

#US vows to get tough on Karzai
You May Also like: