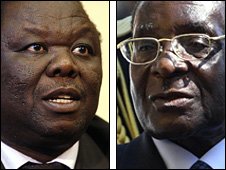 HARARE: Zimbabwe averted a political meltdown Friday after Prime Minister Morgan Tsvangirai ended a boycott of the unity government, but faced a new deadline to resolve a slate of thorny disputes.

A summit of southern African leaders ended late Thursday with Tsvangirai agreeing to end his three-week boycott of the government that he formed in February with President Robert Mugabe.

The summit gave the rival leaders 30 days to negotiate an end to their disputes, including a feud over key government appointments and the arrest and harassment of Tsvangirai loyalists.

"We are giving dialogue a chance, dialogue is our biggest tool as it brought this inclusive government," Nelson Chamisa, spokesman for Tsvangirai's party, told AFP on Friday.

"What remains to be seen is the enforcement of this decision, but this new deadline presents a perfect opportunity to our partners in (Mugabe's) ZANU-PF to show seriousness."

South Africa was tasked with evaluating Zimbabwe's progress and reporting back to the Southern African Development Community (SADC), the 15-nation bloc that acts as guarantor to the power-sharing deal.

Tsvangirai spoke only briefly afterwards to announce the end of the boycott, but Mugabe has made no remarks.

The state-run Herald newspaper, however, brushed off Tsvangirai's concerns and again insisted that Zimbabwe's main problem was a western travel ban and asset freeze on Mugabe and about 200 members of his inner circle.

"ZANU-PF maintains that these (MDC's concerns) are peripheral issues compared to the substantial issue of sanctions," an unnamed source said in the paper.

"In fact, there is dishonesty on the part of the prime minister because he wants to use sanctions as leverage," the source added.

Analysts said that neither party left with anything concrete, except for heightened international pressure to make their shaky power-sharing arrangement hold.

"SADC is walking a very thin line. They will continue to give direction on Zimbabwe, but they would want the parties to find their own solution to the country's problems," said Takura Zhangazha, a political analyst and director of Media Institute of Southern Africa.

"It will be difficult to solve anything within the next 30 days," he told AFP.

Zimbabwe also won a reprieve Thursday from the Kimberley Process against "conflict diamonds", which gave Harare until June to address complaints over human rights abuses in its Marange diamond fields.

The military has seized control of the fields, and Human Rights Watch says more than 200 people have been killed as soldiers forced out local miners. The group says money from the diamond sales are being funnelled into the military and Mugabe's ZANU-PF.

A Kimberley Process mission had recommended suspension for Zimbabwe, but the meeting's decision sidestepped the concerns over rights abuses, campaigners said.

"That does not address the fact that the military continues to commit abuses in the Marange diamond fields," said Tiseke Kasambala, researcher with Human Rights Watch.

Zimbabwe had strong support from allies like Namibia, the current Kimberley chair, and the diamond decision and the SADC summit's outcome again highlighted the unwillingness of regional leaders to take firm action on Mugabe, analysts said.

"At some point SADC leaders need to show their teeth," she said.

#Zimbabwe faces new deadline for reforms
You May Also like: