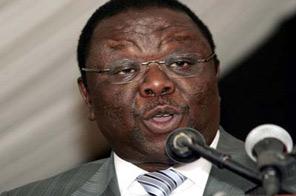 HARARE: Zimbabwe police raided a house used by executives of the prime minister's party, saying they were searching for weapons, the country's finance minister said Saturday.

The raid signals the fragility of Zimbabwe's unity government and will only worsen the already bitter relationship between President Robert Mugabe and his former rival Prime Minister Morgan Tsvangirai.

Mugabe was forced into a power-sharing government with the longtime opposition leader in February after disputed elections last year. Tsvangirai withdrew temporarily from the coalition government on Oct. 16.

Mugabe, 85, has ruled Zimbabwe since independence from Britain in 1980.

Tendai Biti, secretary-general of Tsvangirai's Movement for Democratic Change, said about 50 armed police "ransacked" the house in a Harare suburb on Friday night.

He said a guard, Moffat Nyandure, and his wife were assaulted. Police told Nyandure to dig in the yard around the house in search of weapons, he said. Nyandure was made to dig with his bare hands for five hours.

A room occupied by a party official, who was at the house at the time of the raid, was searched and "valuable party documents" were taken, Biti said. Police "claimed" they had a search warrant, he said.

The house is used by MDC executives who visit from outside of the capital.

Biti said the raid was "provocation" by Mugabe's ZANU-PF party who wanted to see the unity government fail.

"They are behind this attack. Our decision of pulling out of the inclusive government infuriated ZANU-PF and this is the price we now pay for that decision," Biti said.

While both parties have said they are committed to the coalition, many feel it is doomed to collapse.

Tsvangirai has condemned unilateral moves by the president to fill government posts, continuing human rights violations and attacks on activists by ZANU-PF militants and security forces.

But the catalyst for Tsvangirai's withdrawal was the prosecution of Roy Bennett, a popular party member nominated as deputy agriculture minister.

Prosecutors unsuccessfully tried to send Bennett back to jail to await trial on charges linked to discredited allegations that he had plotted the violent overthrow of Mugabe.

"These acts of harassment are an attempt to intimidate us but we will not be intimidated and our disengagement will not be reversed until outstanding issues are resolved," Biti told reporters Saturday.

Tsvangirai this week traveled to meet regional leaders to explain his party's withdrawal. A team of regional ministers will also visit Zimbabwe on Thursday to investigate the move.

Biti said the MDC was adamant it would not return to the coalition until there was movement from Mugabe's party.

However, Mugabe and his party have treated Tsvangirai's boycott with contemptuous indifference.

In his first comments on the issue Friday, Mugabe called the split a "non-event" and said his party would not change its course.

"No amount of pressure will make ZANU-PF yield to any one of their demands," he told state television on his return from a summit of African leaders in Uganda.

"What the MDC wants is to have complete executive authority and that we cannot allow," Mugabe said.

Mugabe has demanded that Tsvangirai do more to get international sanctions lifted and foreign aid and investment restored. He claims the sanctions have been illegally imposed by Western nations and have contributed to the country's economic decline.

However, sanctions such as those imposed by the European Union are largely targeted against Mugabe and his cronies whose assets have been frozen and travel restricted.

Critics blame Mugabe for Zimbabwe's economic meltdown which began after he ordered the seizures of thousands of white-owned commercial farms in 2000, disrupting the agriculture-based economy in the former regional breadbasket.

#Zim police raid PM aides' house
You May Also like: