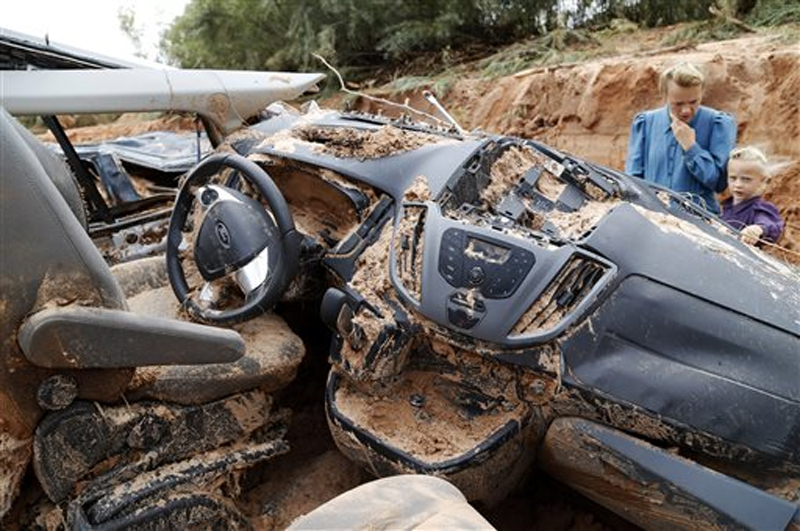 A woman and child examine a vehicle swept away during a flash flood, Tuesday, Sept. 15, 2015, in Hilldale, Utah. Photo: AP
ZION NATIONAL PARK, UTAH:  Seven people who entered a narrow desert canyon for a day of hiking became trapped when a flash flood filled the chasm with water, killing at least six of them in Zion National Park in southern Utah, officials said Wednesday. Known as a slot canyon, the passage is as narrow as a window in some spots and several hundred feet deep. Flooding can turn such canyons into deadly channels of fast-moving water and debris in just minutes. A sudden deluge of rain fueled the flood, which "went from a trickle to a wall" of water, park ranger Therese Picard said. Concerns about more flooding have prevented search-and-rescue teams from entering Keyhole Canyon to look for one hiker still missing. Rescue teams with dogs were looking several miles downstream in piles of debris and in shallow ponds of water that form in rocks. Others were wading through waist-high water in the nearby Virgin River. Park rangers commonly warn hikers about flood risks during monsoon season and did the same with this group before the hikers entered the canyon. But there was no way to reach them in time to alert them to the violent floodwaters coming their way. Officials say the group got a permit to hike the canyon at 7:40 am Monday, before the canyons were closed because of flood warnings issued at 2:22 pm Six of the hikers were from California and one from Nevada. All were in their 40s and 50s. The deadly events happened at the same time flash floods tore through a small community on the Utah-Arizona border just south of the park, leaving at least 12 people dead. The Utah National Guard and a team of searchers who once combed through the World Trade Center towers after Sept. 11 are still looking for a missing boy who was among the 16 people in two cars that were swept up Monday by swift water, mud and debris in a canyon. Three children survived, including a boy who told Utah Lt. Gov. Spencer Cox that he escaped by cutting through an air bag, climbing out a window and jumping off the roof of the vehicle. Cox told The Associated Press that the boy was about 9 or 10 years old and lost his mother and several siblings, who were also in the cars. Bodies recovered Tuesday were found as far as several miles away in the sister towns of Hildale, Utah and Colorado City, Arizona — the home base of Warren Jeffs' polygamous sect. Officials have not released the identities of the dead. At Zion National Park, 20 miles north of Hildale, the group of seven had arrived to climb, rappel and swim through a half-mile canyon route that takes from one to four hours to complete. Hikers use climbing equipment to lower themselves into the canyon. There are more steep descents on the course, as far as 30 feet (9 meters) down sandstone walls. Some rappelling routes end in pools of water where explorers unhook their equipment and swim out. The canyon walls go as far as the eye can see, and it's deep enough to stay cool even in July, Picard said. "It is a water course. You have slick rock that has been eroded. It is dark and cold. Even in July it's chilly," she said. Only 80 people are allowed in per day. While rangers try to impress the danger of flash flooding during the permit process, once people have entered the canyons, there's no way to tell them that waters have started to rise, Picard said. "Ninety percent of Zion is wilderness," Picard said. "It is not possible to contact everyone."
#flash flood #Zion National Park #canyon #trapped in Narrow canyon
You May Also like: