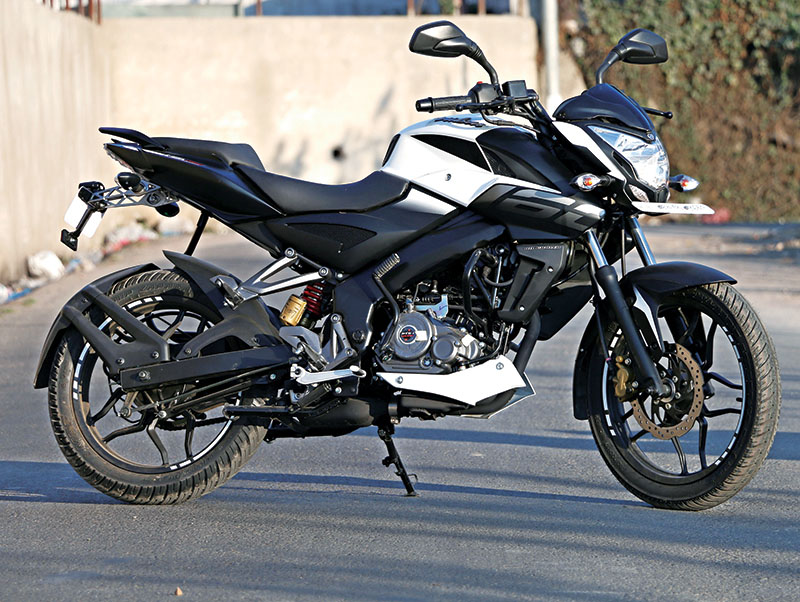 After the success of Pulsar 200 NS, HH Bajaj, the authorised dealer for Bajaj motorcycles in Nepal, is set to launch the Bajaj Pulsar 160 NS. According to the company, the bike will hit the roads of Nepal sometime this week. However, the exact date has not been disclosed.

“The bike will be priced at Rs 2, 59,900 onwards and is targeted towards the youth — ages 18 to 35,” informed an official at the company. He revealed that the new bike will be competing against Honda Hornet 160, Yamaha FZ, TVS Apache 180, and Suzuki Gixxe. “The new Bajaj Pulsar 160 NS is an attractive option for bike buyers.

The bike’s powerful DTSI engine, Nitrox mono-shock rear suspension and underbelly exhausts are some of the features that makes it appealing to the customers,” he said, adding that it borrows styling cues from the Pulsar 200 NS.

The perimeter frame, alloy wheels, underbelly exhaust, instrument cluster as well as the clip-on handlebar have been picked from the Pulsar 200 NS parts bin. The bike has a bold and aggressive appearance. The 160 NS gets large cowls for its fuel tank.

This gives it a very sporty and masculine look. The engine and the alloys are painted black, which give the 160 NS a slightly rugged touch. The new Pulsar gets dual hydraulic telescopic suspension at front while a mono-shock suspension at the rear. The split seats have a large seating area for comfortable ride. The bike gets split grab rails and stylish turn indicators.

Pulsar 160 NS is as  powerful underneath its hood. It is powered by an all-new 160cc, 4-valve single cylinder engine. The engine produces maximum power at 8500 rpm and maximum torque at 6500 rpm.

The Pulsar 160 NS will be available in passion red, pearl metallic white and sapphire blue.