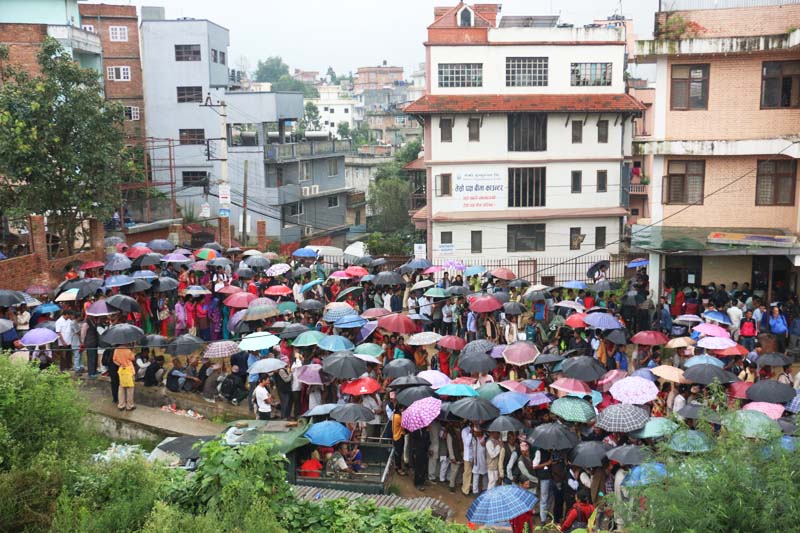 The 2015 earthquake survivors throng the Department of Transport Management, Ekantakuna after the government decided to provide them with subsidies in purchase of taxis for business, on Sunday, July 31, 2016. Photo: RSS/ File
Kathmandu, September 24 A majority of the earthquake-affected people who had received taxi operating permits through a lottery system initiated by the government have started operating their taxis after registration at the concerned government office. Out of a total of 1,500 quake-beneficiaries who received the taxi permits, 1,080 of them have registered their new taxis at the Department of Transport Management — Bagmati Zonal Small and Mid Size Vehicle Office — and have started operating the taxis. According to Basanta Adhikari, chief of the office, the authority has provided a deadline of December 15 for those who received the permits through lottery to register their new taxis at the Department of Transport Management (DoTM). “They still have time to register and operate new cabs and I hope all the taxis will come into operation within the set deadline,” he said. The DoTM had opened registration of new taxis on July 24. As per Adhikari, the least number of quake-affected people who received the permits and who have taken new taxis is from Kathmandu Valley and Dhading. The DoTM has now begun registering the new taxis in the name of those beneficiaries whose names have been registered as house owners. “Initially, we found that the quake-affected people who had received the taxi permits were trying to sell the permits to other people. We started to register the taxis in the name of house owners to control this malpractice,” he said. The government had opened applications for 1,500 new taxis on August 10 last year and opened the lottery on June 21-23 this year. Out of the total 149,000 applicants, the DoTM had selected 1,500 taxi owners as per the government quota.
#earthquake #Department of Transport Management #DoTM #taxi operating permits #Bagmati Zonal Small and Mid Size Vehicle Office
You May Also like: