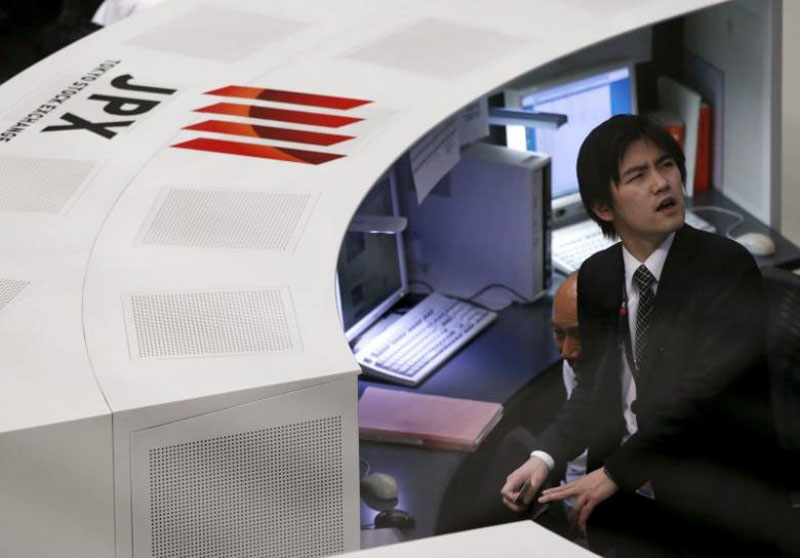 Employees of the Tokyo Stock Exchange (TSE) work at the bourse in Tokyo, Japan, on February 9, 2016. Photo: Reuters
SINGAPORE/TOKYO: Asian stocks retreated on Friday and the dollar edged up from a near eight-week low after some Federal Reserve officials reiterated the case for raising interest rates in coming months. MSCI's broadest index of Asia-Pacific shares outside Japan .MIAPJ0000PUS pulled back 0.6 percent. That would put it on track to end the week, during which it hit a 1-year high, 0.3 percent lower. Japan's Nikkei .N225 erased earlier gains to trade 0.1 percent lower, set for a weekly loss of 2.6 percent. South Korea's Kospi .KS11 also surrendered earlier increases to slip 0.1 percent, on track for a 0.1 percent weekly gain. Australian shares added 0.2 percent, heading for a 0.2 percent decline for the week. China's CSI 300 index .CSI300 and the Shanghai Composite .SSEC slid 0.2 percent, but were still up 1.9 percent and 1.6 percent for the week, respectively. US stocks eked out gains on Thursday following upbeat earnings and forecasts from Wal-Mart (WMT.N) and as higher oil lifted energy shares. [.N] The dollar recovered after more hawkish comments from New York Fed President William Dudley and San Francisco Fed President John Williams. It had fallen to the lowest level since June 24 overnight in response to the Fed's July meeting minutes this week saying more data is needed before interest rates can rise. "There were a few gyrations around expectations for when the Fed will next raise interest rates, with the minutes from the July Fed meeting presenting a relatively dovish picture but regional Fed presidents Williams and Dudley pushing back against market expectations that look to be too dovish," Shane Oliver, head of investment strategy at AMP Capital in Sydney, wrote in a note. Dudley, who said earlier this week that the central bank could possibly hike rates in September, reinforced his hawkish message on Thursday. Williams also signaled support for an interest rate hike in the coming months, warning that waiting too long could see the economy overheat. Williams does not have a vote on Fed policy this year, but his views are seen as influential due to his longstanding relationship with Fed Chair Janet Yellen. The dollar index, which tracks the greenback against a basket of six peers, rose 0.2 percent to 94.367. It is down 1.4 percent for the week. The US currency gained 0.4 percent to 100.23 yen JPY=. It is still on track to lose 1.1 percent on the week. The euro slipped 0.2 percent to $1.13320 EUR= after touching $1.1366 overnight, its highest since June 24. The common currency is headed for a gain of 1.6 percent this week. Oil prices have surged this week on expectations of revived talks by key exporters to freeze output levels. Global benchmark Brent crude LCOc1 pulled back 0.1 percent to $50.84, after climbing as much as 2.4 percent to an eight-week high of $51.05 on Thursday. It is poised to add 8.3 percent for the week. US crude CLc1, which added as much as 3.4 percent on Thursday, extended gains 0.1 percent to $48.28 a barrel on Friday, close to the six-week high of $48.38 touched overnight. It is en route to rise 8.5 percent this week. Both benchmarks have risen more than 20 percent from a lowin early August. The rapid rise puts oil in a technical bull market.
#interest rates #Asian stocks #Asia-Pacific shares #Federal Reserve officials #MSCI's broadest index
You May Also like: