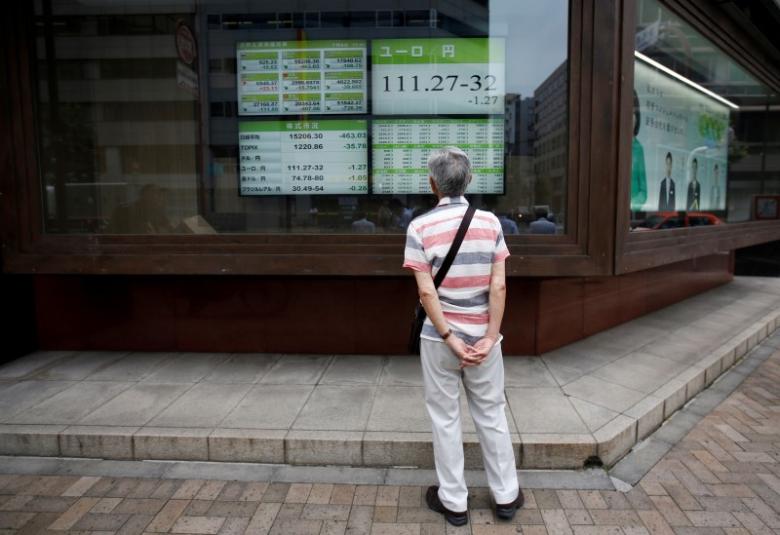 A man looks at an electronic board showing the Japanese yen's exchange rate against Euro outside a brokerage in Tokyo, Japan, July 6, 2016. REUTERS
SINGAPORE: Asian shares on Wednesday followed in the footsteps of Wall Street, which pulled back overnight on disappointing earnings, while the dollar inched down from a seven-month high and oil prices extended this week's losses. MSCI's broadest index of Asia-Pacific shares outside Japan slid 0.6 percent. Japan's Nikkei slipped 0.2 percent, while South Korea's KOSPI dropped 1.3 percent and Australia fell 1.6 percent. China's Shanghai Composite index pulled back 0.2 percent, while Hong Kong's Hang Seng lost 0.6 percent. The declines are "mainly due to the soft lead from Wall Street," said Shane Oliver, head of investment strategy at AMP Capital in Sydney. "Investors remain nervous given the U.S. election, (Federal Reserve) meetings, China property market etc." US stocks ended Tuesday down between 0.3 percent and 0.5 percent, as results and forecasts from companies in sectors including housing and consumer products missed expectations. Apple Inc. too dragged the market lower, as iPhone sales, which were better than expected, nevertheless continued a declining trend. The company also forecast slimmer-than-expected profit margins over the coming holiday season, even as it projected record sales. The US declines followed a mixed performance in Europe, with British shares closing up 0.45 percent, Germany flat after hitting its highest level this year, and France down 0.3 percent. The broader European STOXX 600 fell 0.3 percent. With investors looking ahead to U.S. third-quarter gross domestic product data on Friday, the dollar index, which tracks the greenback against a basket of six global peers, was steady at 98.748. It hit its highest level since Feb. 1 on Tuesday as traders saw a more than 78 percent chance of an interest rise hike by the Federal Reserve in December, according to CME Group's FedWatch data. The dollar edged up 0.1 percent to 104.295 yen after touching the highest level in almost three months on Tuesday. Sterling retreated 0.2 percent to $1.2164 on Wednesday. On Tuesday, it slumped to as low as $1.2082, its weakest in 2 1/2 weeks after Bank of England (BoE) Governor Mark Carney said there were limits to the central bank's ability to ignore the effect of the currency's slide on inflation. His comments, ahead of a policy meeting next week, stifled expectations for more monetary stimulus in Europe. The euro, which slid to a 7 1/2-month low of $1.0851 on Tuesday, recovered to end the session flat, and was trading little changed at $1.0889 on Wednesday. The Australian dollar jumped 0.6 percent to $0.7689 to post its biggest increase in a week after inflation ran slightly faster than expected, boosting bets the central bank will hold policy steady into next year. The stronger dollar and a report that showed US inventories grew nearly three times as much as forecast weighed on oil prices. US crude fell 1.4 percent to $49.30 on Wednesday. It is down 3.1 percent this week. Brent futures retreated 1.1 percent to $50.21, bringing this week's losses to 3 percent. "Basically, the glut continues and demand is not coming back," said Phil Davis, a trader at PSW Investments in Woodland Park, New Jersey. "I don't want to read too much into it but the fact of the matter is it certainly doesn't support $50 oil."
#Wall Street #Asia stocks #oil
You May Also like: