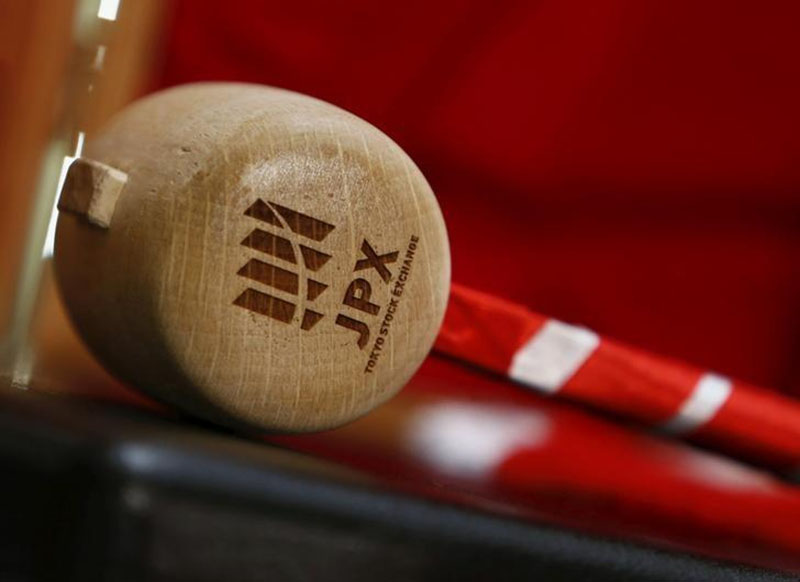 A logo of Japan Exchange Group Inc is seen on a gavel before the New Year opening ceremony at the Tokyo Stock Exchange (TSE), held to wish for the success of Japan's stock market, in Tokyo, Japan, on January 4, 2016. Photo: Reuters
SYDNEY: Asian shares got the new quarter off to a firm start on Monday, while sterling tumbled as Britain set a March deadline to start divorce proceedings from the European Union. Risk sentiment had benefited on Friday from reports Deutsche Bank was negotiating a much smaller fine with the US Department of Justice, though the Wall Street Journal reported on Sunday that the talks were still in flux. Just a hint of a deal was enough to push MSCI's broadest index of Asia-Pacific shares outside Japan 0.8 percent higher. The index climbed 8.8 percent in the third quarter, its best performance since early 2012. The Australian market added 1 percent, while Japan's Nikkei put on 1.1 percent. Japanese data showed confidence at big manufacturers was static in September amid a strong yen and sluggish demand at home and overseas. The mood was supported by a survey showing activity in China's manufacturing sector expanded again in September, which may indicate that recent positive momentum can be sustained. The official Purchasing Managers' Index (PMI) stood at 50.4 in September, identical with the previous month's level. A reading above 50.0 shows growth on a monthly basis. Chinese markets are on holiday for the entire week. Sterling shed half a US cent after British Prime Minister Theresa May said she would trigger the process for the UK to leave the European Union by the end of March. The pound was last quoted at $1.2931 having been down as far as $1.2902 at one point, its lowest since mid-August. May on Sunday told the ruling Conservative party's annual conference that she was determined to move on with the process and win the "right deal". Using Article 50 of the EU's Lisbon Treaty will give Britain a two-year period to clinch one of the most complex deals in Europe since World War Two. Things were quieter elsewhere in the currency market, with the dollar steady at 101.36 yen having wandered between 101.02 and 101.75 on Friday. The euro was flat at $1.1231, after rebounding from a nine-day low of $1.1153 on Friday, while the dollar index was up 0.08 percent at 95.543. Waiting on deutsche deal A rally in financial stocks led Wall Street to a firmer close on Friday. The Dow rose 0.91 percent, while the S&P 500 added 0.8 percent and the Nasdaq 0.81 percent. A media report late on Friday claimed Deutsche and the U.S. Department of Justice (DOJ) were close to agreeing a settlement of $5.4 billion, rather than the initially touted $14 billion. That report has still not been confirmed. Deutsche Bank AG's US-listed shares jumped 14 percent in reaction, but were still down 11.3 percent for the month. Its Frankfurt-listed shares rose 6 percent. Deutsche has significant trading relationships with all of the world's largest finance houses and the International Monetary Fund (IMF) has identified it as a bigger potential risk to the wider financial system than any other global bank. Oil ran into profit-taking on Monday after enjoying its second straight monthly gain in September aided by OPEC's planned output cuts. Brent crude settled up 4 percent for September and US West Texas Intermediate rose 8 percent. [O/R] Early Monday, the December Brent contract was off 20 cents at $49.99 a barrel, while US crude lost 22 cents to $48.02. Copper steadied near eight-week highs after posting its biggest monthly gain in more than a year-and-a-half as improving Chinese economic data brightened the outlook for demand from the world's top consumer.
#European Union #Asia stocks #Asian shares #Pound Sterling #deutsche deal
You May Also like: