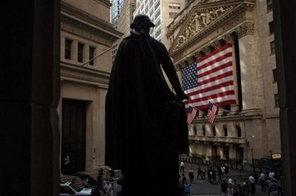 View of Wall Street in New York. A year ago, the financial system appeared to be on the brink of a meltdown and the future of American-style capitalism in doubt. Source: AFP

HONG KONG: Asian stock markets rose Monday, following Wall Street higher after the pace of job losses eased in the world's largest economy.
Benchmarks in Japan, Hong Kong and China added more than 1 percent, while oil prices were little changed above $68 a barrel. The dollar gained against the yen.
Friday's U.S. government report showed companies cut 216,000 jobs last month, which was less dismal than expected and encouraged investor hopes of a turnaround in the labor market. The figure seemed to eclipse the ugly news that U.S. unemployment, despite fewer job losses, hit 9.7 percent its highest since 1983.
Also buoying sentiment were policy changes in China that would allow foreign investors to sink more money into the mainland's stock markets, as well as a pledge by the Group of 20 finance ministers to maintain stimulus measures to prop up the global economy.
"We're turning a little more positive, partly because we had a correction for a month," said Linus Yip, a strategist at First Shanghai Securities in Hong Kong. "The U.S. report also helps support a belief that that we're bottoming out and entering a recovery mode, at least for now."
Japan's Nikkei 225 stock average added 108.68, or 1.1 percent, to 10,295.79.
In Hong Kong, the Hang Seng was up 1.4 percent at 20,606.70. Shanghai's main benchmark gained 1.6 percent to 2,907.50.
Australia's index edged up 0.3 percent, Taiwan's market was 0.8 percent higher and Indonesia's benchmark rose 0.4 percent. Markets in Korea and Singapore were little changed.
Friday in the U.S., investors eventually shrugged off news about worsening unemployment and focused on the slower pace of job cuts.
In quite pre-holiday trade, the Dow rose 96.66, or 1 percent, to 9,441.27.
The Standard & Poor's 500 index rose 13.16, or 1.3 percent, to 1,016.40, while the Nasdaq composite index added 35.58, or 1.8 percent, to 2,018.78.
Wall Street is closed Monday for a public holiday and will reopen on Tuesday.
Oil prices were up slightly in Asian trade, with benchmark crude for October delivery up 18 cents at $68.20, as investors looked to this week's OPEC meeting for a possible change in the cartel's production. The contract Friday rose 6 cents to settle at $68.02.
The dollar strengthened to 93.15 yen from 92.95 yen. The euro rose to $1.4334 from $1.4309.

#Asian markets track US higher after jobs report
You May Also like: