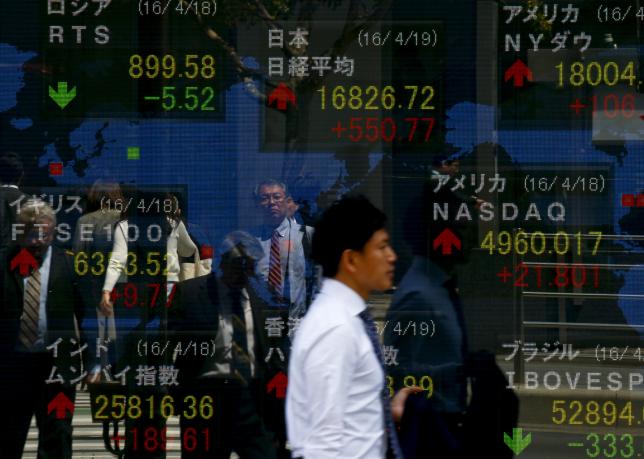 A man walks past a display of the Nikkei average and other market indices outside a brokerage in Tokyo, Japan April 19, 2016. REUTERS
TOKYO: Asian shares slid from a 5 1/2-month high on Friday as disappointing earnings from US blue chip companies looked set to pour cold water on the rally that took off in March. MSCI's broadest index of Asia-Pacific shares outside Japan dropped 0.4 percent, a day after it hit its highest level since early November. Japan's Nikkei fell 0.8 percent from 2 2/1-month high. On Thursday, Wall Street suffered its first loss in four sessions on a mixed bag of quarterly reports and a warning by Verizon Communications that a strike would likely impact its bottom line. The S&P 500, which came within a striking distance from its record closing peak of 2,134.28 touched last May, lost 0.52 percent to 2,091.48. After the bell, Google parent-company Alphabet, Microsoft, Visa and Starbucks all posted disappointing quarterly reports, sending their stocks down 4 percent or more. Alphabet, the world's second-largest company by market capitalization, fell more than 6 percent, taking around $32 billion off its market value. US stock futures were down 0.1 percent from late U.S. levels in early Asian trade. "Essentially, global shares and commodities have been rallying since US Federal Reserve Chair Janet Yellen had indicated a dovish stance in March," said Norihiro Fujito, senior investment analyst at Mitsubishi UFJ Morgan Stanley Securities. "But you would need more improvement in economic fundamentals for the rally to go further. The S&P 500 is quite overvalued, trading at 17.8 times the forecast profits. Disappointing earnings from hi-tech companies will surely cap the market," he said. Oil prices also fell 3 percent on Thursday after scaling five-month high, pausing from a two-day rally as producers from Russia to Saudi Arabia and Iran to Libya hinted at more output, and on growing US crude stocks. Brent crude futures last traded at $45.03 per barrel, off Thursday's peak of $46.18. Still, Brent is up more than 4 percent on the week and about 66 percent higher than a 12-year low of $27.10 hit in January. The rise in oil prices is seen behind a noticeable rise in global bond yields in the past couple of days. The 10-year US Treasuries yield rose to a three-week high of 1.891 percent on Thursday and stood at 1.866 percent, compared to 1.752 percent at the end of last week. The 10-year German Bunds yield rose to a one-month high of 0.242 percent. In foreign exchange markets, commodity currencies took a breather from their recent rally while the euro slipped even as the European Central Bank chief offered no new indication of further easing on Thursday. The Australian dollar traded at $0.7740, off its 11-month high of $0.7836 touched the previous day. The euro stood at $1.1291 off the one-week high of $1.1399 set on Thursday. The yen strengthened against the dollar to 109.37 per dollar, recovering from Thursday's two-week low of 109.90.
#United States #Asian shares
You May Also like: