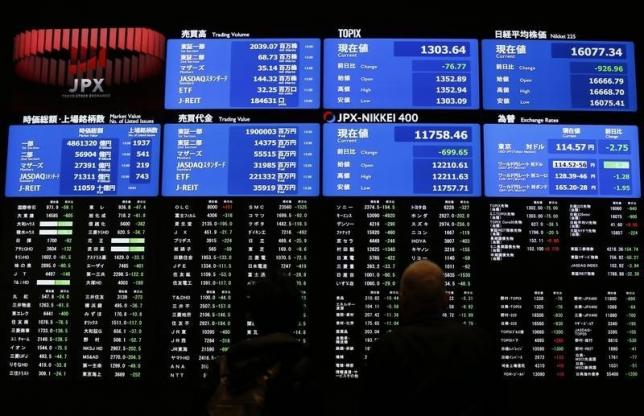 Visitors looks at an electronic board showing the Japan's Nikkei average (top R) at the Tokyo Stock Exchange (TSE) in Tokyo, Japan, February 9, 2016. REUTERS
SINGAPORE/TOKYO: Asian shares retreated from a seven-week high on Tuesday as the oil price rally that boosted global equity markets reversed, while the euro and sterling were hit by uncertainty over Britain's membership in the European Union. MSCI's broadest index of Asia-Pacific shares outside Japan fell 0.2 percent, after earlier rising 0.4 percent to its highest level since Jan. 8. Japan's Nikkei pared morning gains to trade up 0.1 percent. Oil markets jumped as much as 7 percent on Monday as speculation about falling US shale output fed the notion that crude prices may be bottoming after their 20-month collapse. But they retreated on Tuesday on concern that any cuts to US production may be countered by rising output from Iran. Both US crude futures and the international benchmark Brent retreated 1.4 percent on Tuesday. Short-covering in oil began last week after Saudi Arabia and fellow OPEC members Qatar and Venezuela agreed with non-OPEC member Russia to freeze output at January's highs. "The oil market seems to have become firmer recently," said Masahiro Ichikawa, senior strategist at Sumitomo Mitsui Asset Management. But while the market seems to like the fact that top producers are starting to take action to rein in supply, it "remains questionable' whether such moves will have a real impact, he said. Monday's strength in oil prices drove the S&P 500 Index up 1.45 percent to 1,945.50 overnight, close to this month's high of 1947.20, led by a 2.2 percent increase for the energy sector. The volatility index, which measures implied volatility of stock options and is often seen as investors' fear gauge, fell below 20 percent to the lowest closing level since early January. Spot iron ore for immediate delivery to China's Tianjin port jumped seven percent on Monday to hit its highest level since late October. Copper also gained 1.6 percent to $4,694 a tonne, near its one month high of $4,720 touched in early February. But it fell back 0.7 percent to $4,661 on Tuesday. The strength in resources on Monday helped commodity-linked currencies such as the Australian dollar scale a seven-week high of $0.7248. It pulled back a little and was last at $0.7222 on Tuesday. The British pound remained vulnerable a day after falling nearly 2 percent, its biggest one-day drop in almost six years, on worries Britain may leave the European Union. The pound hit a seven-year low of $1.4057 on Monday, after London Mayor Boris Johnson, one of the country's most popular ruling party politicians, announced his support for Britain to leave the EU in a June referendum. The British unit last stood at $1.4114. The euro also fell to $1.10035 on Monday, its lowest in almost three weeks, on fears "Brexit" could undermine the European project. The common currency recovered to $1.10420 on Tuesday. "Fears of Brexit have relegated the GBP to the bottom of the leader board," said Rodrigo Catril, FX strategist at National Australia Bank. "The euro was also an underperformer against the USD, suggesting the market is expressing some concerns for the euro if the UK chooses to leave the European Union." As shares retreated, the dollar also gave up its earlier gains against the yen. It slumped 0.6 percent to 112.205 yen, after opening at 112.87. The dollar's index against a basket of six major currencies hit a three-week high of 97.60 on Monday but slipped back to 97.254.
#European Union #Asian shares
You May Also like: