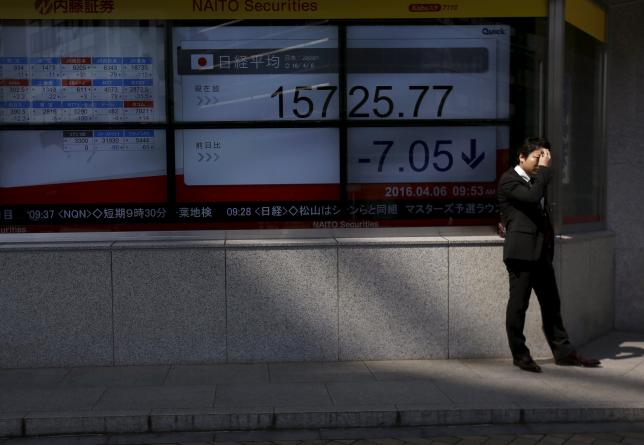 A businessman wipes his face as he stands in front of electronic boards showing the Japan's Nikkei average outside a brokerage in Tokyo, Japan April 6, 2016. REUTERS

TOKYO: Asian stocks were on the defensive on Tuesday after oil prices eased and as investors braced for central bank policy meetings in the United States and Japan later this week.

The company, sitting on crude reserves of more than 15 percent of global oil deposits, is expected to be valued at more than $2 trillion, or more than five times larger than Exxon Mobil (XOM.N), ahead of the sale of less than 5 percent of it through an initial public offering (IPO).

Investors are cautious on buying riskier assets ahead of the US Federal Reserve's two-day policy meeting starting later on Tuesday.

A surprise drop in new US home sales data for March published on Monday supported a view of anaemic US economic growth, which may keep the US central bank from raising interest rates.

In fact, markets sees no chance of a rate increase at this week's meeting and are pricing in just about a one in five chance of a move at the next meeting on June 14-15.

Yet, Federal Reserve officials have repeatedly said a hike in June is on the cards.

"Even dovish policy makers such as (Boston Fed President Eric) Rosengren are saying markets expectations are too low. And it is not hard to imagine many at the Fed feels current market rates are too low," said Tomoaki Shishido, fixed income strategist at Nomura Securities.

"So the Fed may try to urge markets to price in higher rates. On balance, we are more likely to have a hawkish surprise than a dovish surprise," he added.

In the currency market, however, the dollar retreated against many major currencies while kept an upper hand against emerging economy currencies.

The yen weakened sharply on Friday on a report that the Bank of Japan is considering cutting rates at which the central bank lends money to banks. But doubts are growing about how effective such a measure would be in lifting the moribund economy.

The Bank of Japan will make its policy announcement on Thursday.

The British pound held near a 10-week high as bets on a Brexit eased after US President Barack Obama voiced his support for Britain's staying in the European Union.

#United States #Japan #Asian stocks #oil
You May Also like: