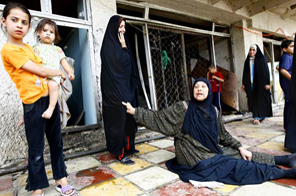 BAGHDAD: Repairs to government buildings after massive bombings in the centre of the Iraqi capital last week will cost around 16 million dollars, officials said on Sunday.

The near-simultaneous attacks, a truck bombing at the justice and public works ministries and a car bomb at the Baghdad provincial government offices, killed 153 people and left more than 500 wounded.

Following a cabinet meeting on Sunday, ministers allocated 16 billion dinars (13.7 million dollars) for the rehabilitation of the ministries, both of which were badly damaged in the October 25 carnage.

"The cabinet agreed that the ministry of finance should transfer the money ... to fix and renovate the ministries of justice and municipalities," a government statement said.

"When I went to the hospital, I visited all the people who were injured in both the attacks -- at the ministries, and the provincial government buildings," he said, to underline his point.

#Baghdad bombs to cost 16 million dollars in repairs
You May Also like: